Concern about sharp decline of dollar? 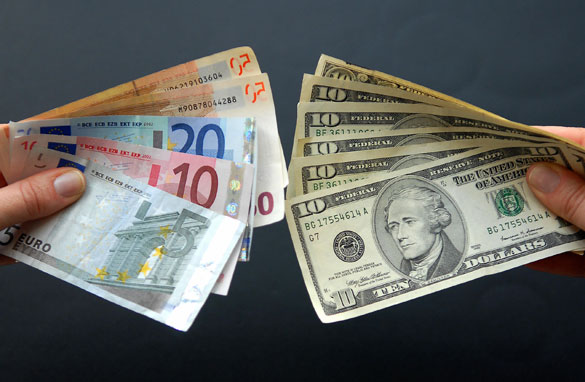 The U.S. dollar just isn't what it used to be. In fact, the dollar has been declining in value for 6 years now against other major currencies.

And, if you look around, it's hard not to see the signs: hordes of vacationing Europeans are picking up bargains in the U.S., while Americans traveling overseas are hit hard with sticker shock. Canadians now flock here for shopping bargains, instead of the opposite. A Belgian company is attempting a hostile takeover of Anheuser-Busch, the largest brewer in the U.S. If the takeover goes through, it might be the first of many foreign takeovers of American companies.

While everything made in the U.S. is so much cheaper to foreigners, Americans are paying more for imported goods, while most are also grappling with rising food and energy costs. Since oil is bought and sold in dollars, the devalued dollar makes gasoline that much more expensive for Americans.

Some even suggest the continued decline of the dollar could one day lead to it being replaced by the Euro as the so-called "primary reserve" currency. There are stores right here in New York that now accept euros as payment.

Meanwhile, the message from Washington doesn't seem to change much. President Bush has often talked about his support for a "strong dollar", just last week saying “We're strong-dollar people in this administration." Really, Mr. President? You have presided over the most precipitous drop in the value of our currency in our nation's history.

Here’s my question to you: How concerned are you about the sharp decline in the value of the U.S. dollar?

Rory from South Carolina writes:
It breaks my heart that none of the candidates, or so-called leaders, is talking about our federal budget deficit and the huge private debt that is also at historic highs. Obviously the dollar is falling in value. It shouldn't come as a surprise. Our way of life is not sustainable. It will change one way or another.

Robert from Forest, Virginia writes:
Jack, As a banker, I am very concerned with the decline in the value of the U.S. dollar. The huge budget and trade deficits combined with the Iraq War, high gasoline and food costs and the growing economic power of China all point to a declining U.S. economy that is out of control. We are quickly losing the ability to control our own destiny.

Doug writes:
I'm a 44-year-old defense industry worker and for the first time in my life, I lie awake in bed worrying about the financial future of America and the future of the dollar.

Pugas from Arizona writes:
I'm more concerned in the decline of American values than the decline of the dollar. Some pain might do us some good. It could help our character as a people. Let us think longer term and prepare for the future, whatever that might bring.

Becky writes:
Very concerned. I am a junior in college, and have just returned from studying abroad in Europe. I could not believe how bad the dollar was. The exchange rate just emptied out my bank account. I was based mainly in the Czech Republic, which isn't on the Euro yet, so it was much cheaper. However, I saw the declining value of the dollar in just 4 months. Traveling is what makes my life fulfilling, but right now, I just can't afford it.

Dennis writes:
For the majority of Americans, the lower value of the dollar is not a problem. Because of high gas prices, most of us don't have a dollar left.