Was the Iraq war about oil all along? 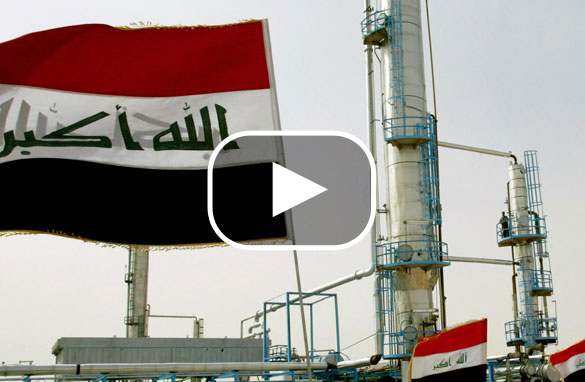 Iraqi flags flutter at a new oil refinery plant in the Shiite holy city of Najaf, central Iraq. Click the Play Button to see what jack and our viewers had to say. (PHOTO CREDIT: GETTY IMAGES)

Now, as Bill Moyers reported on PBS: "...one by one, these concocted rationales went up in smoke, fire and ashes. And now the bottom line turns out to be ... the bottom line. It is about oil."

More than 5 years after the start of the war, the U.S. has lost more than 4,100 troops, tens of thousands more are wounded for life, hundreds of thousands of Iraqis are dead, millions more are displaced, and the U-S taxpayer is stuck with a bill that could top trillions of dollars. And, what about the oil? Well, it hit a new record high today of more than $143 a barrel. Gas prices are up almost 38% from a year ago.

The New York Times reports that the Bush administration played a key role in drawing up no-bid contracts between the Iraqi government and five major Western oil companies to develop some of the largest fields in Iraq. Critics accuse the administration of making sure Western companies get this access in the country that holds the third-largest oil reserves in the world. For example, Russian companies with experience in Iraq were hoping for contracts, but they're still waiting.

The White House denies steering the Iraqis toward any decisions. A State Department official says its advice was "not binding."

Here’s my question to you: Do you believe the Iraq war was about oil all along?

END_OF_DOCUMENT_TOKEN_TO_BE_REPLACED 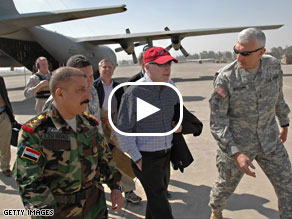 General Clark is a former NATO commander who backed Hillary Clinton and now supports Barack Obama. He says that performing heroic military acts is not a substitute for command experience. Clark says he honors McCain's service as a POW, and calls him a hero. He credits McCain's time on the Senate Armed Services Committee and his travel worldwide, but he points out that John McCain hasn't held executive responsibility. General Clark says, "I don't think riding in a fighter plane and getting shot down is a qualification to be president.”

McCain was more than just a fighter pilot, though. After being a POW, he went on to become the commanding officer of the largest squadron in the U.S. Navy.

McCain's campaign responded, saying Obama doesn't stand for a new kind of politics, that he's willing to do and say anything to get elected - including allowing his surrogates to "demean and attack" McCain's military record.

But, Clark isn't the only one. The Politico reports that John McCain is coming under fire about his military service from critics on the left and right. Some accuse him of war crimes for bombing targets in Hanoi during the '60s. One liberal blog is accusing McCain of "disloyalty" during his time as a POW since he participated in Vietnamese propaganda films and interviews. Others are asking for more detailed records from McCain's Navy service.

Here’s my question to you: Are John McCain's military credentials overrated?

END_OF_DOCUMENT_TOKEN_TO_BE_REPLACED

If Iran is attacked, should the U.S. or Israel do it? 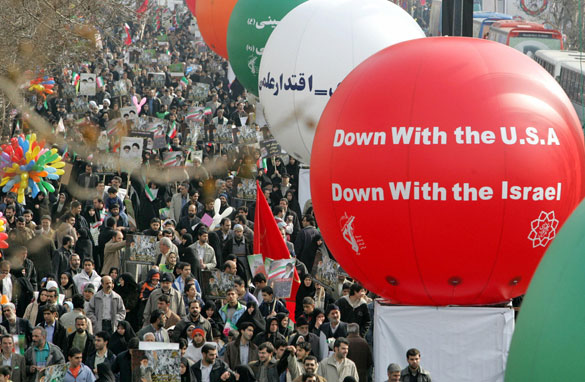 Balloons in the colors of the Iranian flag read anti-US and anti-Israel slogans as Iranians take part in a rally to mark the 28th anniversary of the Islamic revolution in Tehran. (PHOTO CREDIT: GETTY IMAGES)

Time is apparently running out to do something about Iran's nuclear program.

In the latest issue of New Yorker, Sy Hersh reports the U.S. has stepped up covert operations inside that country–everything from spying on Iran's nuclear program to supporting rebel groups opposed to the country's ruling clerics.

Meanwhile, a former head of the Israeli intelligence agency, Mossad, tells London's Sunday Telegraph that Iran may have a nuclear weapon within a year. And he says there's no doubt Iran intends to use it once it gets it. He says the time is getting shorter for Israel to act.

Unlike the U.S., which has spent more than 5 years looking for Osama bin Laden and invading Iraq and not succeeding at either, the Israelis tend not to mess around.

While the international community, led by President Bush, continues to bluster and sanction and threaten, Iran continues its relentless march toward nuclear weapons.

There's a lot of stuff the civilized world doesn't want to deal with. Iran having nuclear weapons would be somewhere near the very top of the list. Unless they have a change of heart – a la North Korea – it looks more and more like Iran is going all in. And it's going to be up to somebody in the west to decide whether or not to call.

Here’s my question to you: If Iran is attacked, who should do it: the United States or Israel?