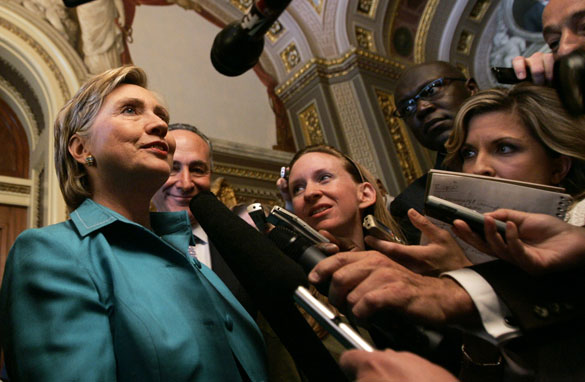 Bruce writes:
She should enthusiastically support Obama. I don't get all this stuff about how Hillary's debt is any of Obama's concern. Did he even encourage her to borrow the money? Did he cosign? Hey, if you borrow the money, it’s your problem. It’s not even Hillary's supporters’ problem. Hillary and Bill need to liquidate some of their assets and pay Hillary's debt.

Dori from Arizona writes:
Hey, Jack! Hillary can have the opening act. She can welcome and greet, get the crowd clapping and stomping their feet. We know she can give a good speech when she sets her mind to it. Then, as the festivities roll on, Sen. Obama can take over. He'll close it with a slam-dunk like the party hasn't seen in eons!

Jan writes:
Her role should be whatever she wants it to be. She’s the one with 18 million of us who still think she should be president, the one with some actual answers and goals to the problems at hand. She’s the fighter and the one who's been there and done that!

Winston from Las Vegas writes:
The role for both Hillary and Bill Clinton at the Democratic Convention should be that of "ushers". The Clintons are bitter; the American public voted and decided that they've had enough of them. They are sore losers and it's time they realize that it's not about them anymore.

Beau from Fredericksburg Virginia writes:
You know, Jack, I think Hillary should be head of security at the convention. Seeing as how she managed to evade the sniper fire in Bosnia, she seems well-qualified.

Willow from Iowa writes:
She should be a wonderful cheerleader. She should rally everyone together to help the Democrats win in November. She shouldn't, however, continue to remind everybody of her 18 million voters. This is Obama's time, not hers.

Greg from Cabot, Arkansas writes:
Maybe she could bake some cookies.