Become president without campaigning on weekends? 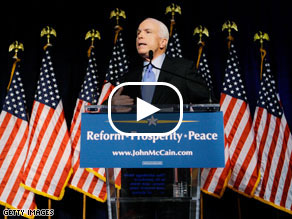 The Politico reports that McCain has held only one public campaign event on a weekend since wrapping up the Republican nomination in February, more than 4 months ago.

McCain aides say he uses time on the weekends to return to Arizona so he can rest, work on policy and meet with aides. McCain has also hosted reporters and donors over the weekends, appeared on Saturday Night Live and visited troops in Iraq and at Walter Reed. His advisers say McCain will campaign on weekends for a lot of the summer, including a speech in Washington and a fundraiser in Kentucky both on Saturday.

Nevertheless it's a topic that raises some eyebrows, particularly because of McCain's age. Political experts suggest that the decision to not campaign on weekends was not the best use of the extra time McCain had when the Democrats were still going after one another. Ed Rollins – who ran Ronald Reagan's re-election campaign – says it's easier to draw big crowds on weekends when people aren't working. Rollins says McCain could have used the time to go to less populated areas and "rejuvenate" the Republican base.

His defenders point out that it's such a bad environment for Republicans right now that McCain could have exhausted himself and not had much to show for it.

Barack Obama has made 7 weekend appearances this month alone.

Here’s my question to you: Can a candidate be elected president without campaigning on weekends?

R. writes:
“The heights by great men reached and kept were not attained by sudden flight, but they while their companions slept, were toiling upward in the night.”
-Henry Wadsworth Longfellow
Both Obama and McCain are good men who have earned the right, in different ways, to contend for the presidency. But, this is the people’s government, and the people want to know: Who will work hardest for us?

Mickie from Philadelphia writes:
I don't think it would matter if it were only occasionally taking a weekend off, but I definitely think to hit the critical voters (i.e., those who are working, mothers who are running around taking care of their children, etc.) you have to be willing to get out there with those people when they are available.

Chris from Ocean Grove, Massachusetts writes:
If the candidate says all the right things during the week, why not? As long as he is the president during the weekends when he wins and not clearing brush on some ranch, I'm all for it.

Dave from Mission Viejo, California writes:
Not campaigning on weekends is a great idea. Not campaigning at all until about October 15 would be even better. I have heard so much from the candidates that I am beginning to think I could not vote for anyone . My plea to McCain and Obama is: please give yourselves and the rest of us a break. With three debates and two to three weeks of campaigning, I am confident these guys could tell us all they have to say.

Andrew from Arnold, Missouri writes:
If McCain feels that he doesn't need to campaign on weekends, that's fine. But when Obama starts swinging McCain around by his funny looking tie in November, we'll know why.