Americans fed up with all 3 branches of govt.

Here's a pretty depressing statistic: Fewer than half of Americans approve of the job performance of all 3 branches of the federal government – President Bush, Congress and the Supreme Court.

Congress' approval stands at a pathetic 19%, just a point better than last month's 18%... which was the worst rating ever. Congress usually gets the lowest rating of all 3 branches of government, and with good reason.

As for the Supreme Court,48% of those surveyed say they approve of the job of the high court. That's significantly higher than the president or Congress. But it's still less than half, and the court has only measured a lower approval rating one other time.

It's no surprise that Republicans rate President Bush much higher than Democrats or Independents... and Democrats give Congress slightly better marks than do Republicans.

But taken together these numbers show how fed up the American people are with the way Washington is currently operating. It's not good news for incumbents in Congress who are up for re-election – that's all the members of the House and one-third of the members of the Senate. And, Barack Obama and John McCain better take note; whichever candidate better understands what needs fixing down there in Washington will probably be the next president.

Here’s my question to you: All three branches of government are near historical low approval ratings. What will that mean for the election?

END_OF_DOCUMENT_TOKEN_TO_BE_REPLACED 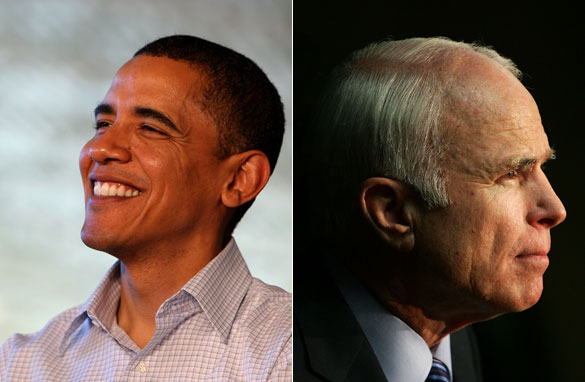 Independent voters are crucial in presidential elections. You can bet John McCain and Barack Obama will do everything in their power to get their support.

A new Washington Post-ABC News poll shows that McCain and Obama are even among independents – which suggests a shift towards McCain in the past month.

When it comes to the issues, independents see McCain as more credible on fighting terrorism and they're split evenly on who is the stronger leader and who is better on the war in Iraq. However, 62% of independents polled say the Iraq war is "not worth fighting."

Obama has a double-digit advantage among independents on many domestic issues including: the economy – which is the nation's No. 1 issue, gas prices, health care, global warming, and women's issues.

In recent elections, Democratic and Republican voters have overwhelmingly supported their party's candidate. But this time around those identifying themselves as Democrats far outnumber Republicans, which could spell trouble for McCain. It means he will have to attract a larger percentage of independent votes in order to win.

A couple of other factors working against McCain in this poll: people are more unhappy than ever with the direction this country is going. 84% say we're seriously on the wrong track. Also, when asked which party they favor for Congress in the fall, 52% say Democrat, only 37% say Republican.

Here’s my question to you: What will John McCain and Barack Obama have to do to win over independents?

END_OF_DOCUMENT_TOKEN_TO_BE_REPLACED 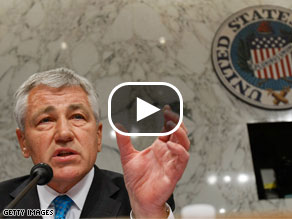 Barack Obama has already made history in this campaign, but what if he does it one more time by picking a Republican as his V.P.?

Salon.com reports about the buzz surrounding GOP Sen. Chuck Hagel of Nebraska as a potential choice for Obama. Hagel admittedly is a long shot for the job. Just imagine the symbolism: Obama could truly hit home the message that he's serious about changing the way Washington works by running with a Republican.

And there's no better Republican for him to run with than Chuck Hagel. Hagel is retiring at the end of his term. He has been very tough on President Bush when it comes to the war in Iraq. Last year, Hagel said that Bush was "not accountable anymore" and that "before this is over, you might see calls for his impeachment." Hagel was also recently critical of his longtime friend, John McCain... particularly some of McCain's comments about Iran. Hagel said he thinks McCain "is smarter than some of the things he is saying."

The article points out that although many tout Hagel as a moderate Republican who's willing to reach across the aisle, he's still a conservative. And there's the rub. Former Sen. Bob Kerrey, a Democrat and friend of Hagel's, says it would be hard to imagine his party backing someone who's anti-choice, anti-civil rights for gays and anti-gun control, adding "It's not impossible, but it's bumping right up on the edge."

For his part, Hagel has yet to endorse John McCain. It's been reported that Hagel's wife gave Obama $500 in February. And, in a CNN interview last month, Hagel himself laughed off a question about being Obama's running mate, but he didn't rule it out saying he's "going to try and find some honest work."

Here’s my question to you: What message would it send if Barack Obama picked Republican Chuck Hagel as V.P.?