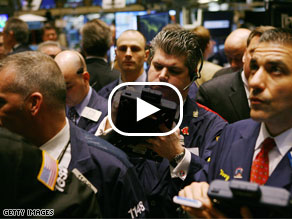 The economic news seems to get worse with each passing day... but it sounds like John McCain may not have heard the news. Here’s what he said Thursday in Florida: “I have a fundamental belief that, I have a great belief that the fundamentals of our economy are very strong, very strong.”

Really, Senator McCain? That's not what millions of Americans are saying. A new CNN/Opinion Research Corporation poll shows 78% of those surveyed rate economic conditions as "poor”. Only 22 percent say "good."

Here are some of the reasons: The economy lost another 49,000 jobs last month, which means more than 324,000 jobs have been lost since the first of the year. The unemployment jumped to 5.5% last month – that's the biggest increase in the unemployment rate in 22 years.

More and more Americans are losing their homes: one million homes are now in foreclosure. The equity Americans have in their homes-their biggest asset-has declined to the lowest level since the end of World War II. Americans' net worth has declined by a staggering $1.7 trillion dollars.

Then there are the rising costs of energy. For the first time in our history, gasoline now tops $4 a gallon and is headed higher. Oil traded at a record high of $139 a barrel Friday, with predictions of $150 a barrel by July 4 and Goldman Sachs saying it could reach $200 a barrel within two years. The peak summer driving season is just getting under way. These fuel prices impact the cost of virtually everything else.

And, with the nation on the brink of recession, the stock market is taking a hit too – declining almost 400 points last Friday alone. The U.S. dollar continues to weaken against almost all foreign currencies – declining 15% against the euro in the last year. We are $9 trillion in debt thanks to the wars in Iraq and Afghanistan and the irresponsible fiscal policies of the Bush administration. And we continue to run huge trade deficits with China.

Here’s my question to you: Is John McCain right when he says the fundamentals of our economy are very strong?

William writes:
Oh really? Our gas was $1.46 and he and his Congress invaded Iraq after 9-11. Now, 4000+ Americans dead and thousands with their limbs blown off. Iraqis are keeping their oil profits and our economy and lives are going down the tube. Pretty hard to think there is an economic problem when your wife is worth a few hundred million. What a guy. Hero? Yes. In touch? Not even close. And this, from a Republican who was going to vote for him until this today.

Nancy from Florida writes:
Does John McCain live in the same United States of America that the rest of us do? While my family can weather the current situation, many families cannot. The sharp rise in unemployment should be enough to get anyone's attention. Rising prices and no jobs does not exactly equal "strong."

Eric from Flint, Texas writes:
McCain is correct in saying the fundamentals of the economy are strong. Unemployment at 5.5% and gasoline for $4 a gallon would be such good economic news in France that there would be dancing in the streets.

Beverly from New York writes:
Jack, Mr. McCain resides in a bubble, happily insulated by his wife's money. He should try living like an ordinary American for 1 month on a Social Security check. I think his perspective on the economy would change.

Russ from St. Paul, Minnesota writes:
Jack, The economy isn't on the rise, but it's not that bad. All you need to prove it is look at the weekend box office. Kung Fu Panda earned $60 million dollars. No offense to Jack Black and Angelina Jolie, but that really shows some people have too much money in all honesty.

Tiffany from Richmond, California writes:
His economy is in good shape – his wife is rich!