Should Obama ask Bill Clinton to campaign for him? 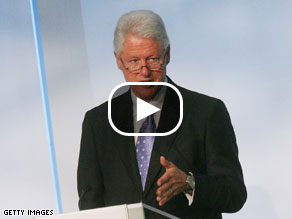 Barack Obama likes the idea of Bill Clinton hitting the campaign trail for him as he faces off against John McCain. When asked if he would be able to mend fences with the former president and if he could use him during the general election, Obama said, "Yes and yes” adding "I think Bill Clinton is an enormous talent, and I would welcome him campaigning for me."

But behind the scenes, Obama's advisers might be thinking something else. The New York Daily News reports senior campaign officials don't know what to make of Bill Clinton's "erratic and increasingly sulfuric behavior" on the campaign trail and many believe he's too toxic to be a high-profile surrogate for Obama.

One Democratic operative says Hillary Clinton will be a huge asset for Obama, but that the former president "needs to just stay out of it." Others say Bill Clinton and Obama will likely appear together in rural areas that had heavily supported Hillary.

It's no wonder Obama's advisers might be hesitant to employ the former president, once considered one of the most savvy politicians of his time. Consider what he did for his wife. There was South Carolina where he was accused of inflaming racial fears about Obama. He called Barack Obama's claims about his stance on Iraq a "fairy tale." There was the time President Clinton brought up and defended Hillary's Bosnia sniper fire fable which was totally untrue – after the controversy had quieted down. And just this week, he lashed out about a Vanity Fair reporter who had the temerity to suggest Bill Clinton has gotten angrier in his old age by calling him a "scumbag" "sleazy" and "slimy." Whaddya mean angry?

Here’s my question to you: Should Barack Obama ask Bill Clinton to campaign for him?

Sharon from Canada writes:
You don't know what Bill would say. Obama would be distracted all the time either worrying about what he said or correcting what he said. Jack, all someone would have to ask him is whether he thought Hillary or Obama would make the best president. Bill's days are over as far as politics are concerned.

Kevin from Warren, Michigan writes:
After the past comments Bill Clinton had to say about Obama and his campaign, how could Obama even think of asking him? If Hillary ends up as his running mate, Bill campaigning is almost a guarantee. Billary is a package deal. If she is used for other party purposes, Obama should not even ask him.

Terry writes:
Yes. If Bill Clinton were running for president, he would get my vote. Look what happened to Al Gore because he did not want President Clinton to campaign for him. He is a great politician and someone of great value!

Travis from Denver, Colorado writes:
No way. Bill Clinton has caused enough trouble for Hillary's campaign. Having either of the Clintons at Obama's side during this race is a recipe for disaster. Obama's whole message has been to set himself apart from Washington insiders; it wouldn't help to have a former president and first lady sharing the spotlight.

Joe writes:
Only if he wants to win!

Bodo from Ann Arbor, Michigan writes:
Bill's presence on the campaign trail would to the same damage to Obama as he did to his wife. But Obama could use him as a fundraiser among Hillary's supporters.

Josh from Ontario writes:
Why wouldn't Obama want the first black president to help him on the campaign trail?

JW writes:
Bill Clinton could possibly do Obama some good in those states I call "the new Mississippis" such as Kentucky, West Virginia, Pennsylvania, Tennessee and perhaps Arkansas. Mr. Obama probably would not be well served by any of the William J. Clinton behaviors in the more normally enlightened states.