More than a million homes in foreclosure

More than a million homes in the U-S are now in foreclosure, a staggering figure that shows how hard the economy is hitting millions of Americans.

A report by the Mortgage Bankers Association shows the rate of both home foreclosures and late payments set records in the first quarter of this year, the highest in nearly 30 years. And, it's only expected to get worse. The group says the slump in housing prices was the biggest factor for more foreclosures and late payments. And, there will likely be more in the months to come since home prices are expected to keep dropping.

Some states are especially hard hit: California, Florida, Nevada and Arizona accounted for 89% of the increase in new home foreclosures. These are states where the prices dropped sharply and there was too much supply due to a lot of construction.

Many homes in Michigan and Ohio have also been foreclosed. In those states, it's because of rising job losses, especially in the automotive sector.

Around the country, the housing market meltdown and ensuing credit crisis have helped push the economy to the brink of a recession – if we aren't there already. Consumers and businesses are spending less, and employers have cut more than a quarter-million jobs in the first four months of this year. Investor Warren Buffet says the recession has already started and will be longer and deeper than anyone expects.

Here’s my question to you: What does it mean when more than a million homes are now in foreclosure?

END_OF_DOCUMENT_TOKEN_TO_BE_REPLACED

How can McCain compete with Obama’s money? 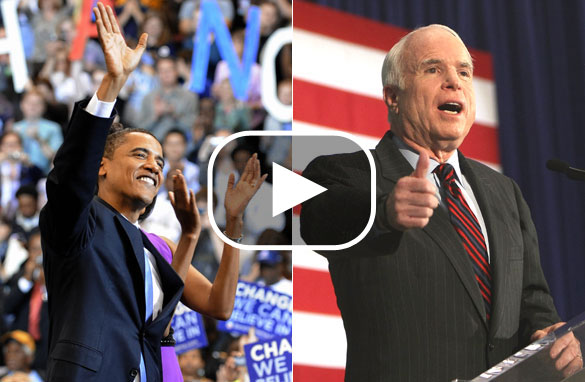 Barack Obama has been a money machine in the primary season, raising more than $272 million from primarily small donors.

It's got to leave John McCain, who raised about $122 million, scratching his head as he sizes up his opponent for the general election.

The Politico breaks down what the money story could mean come November, especially if Obama can tap into some of Hillary Clinton's fundraisers, who raised another 200 million dollars.

Consider this: If each of Obama's donors gave him $250, he'd have $375 million to play with in the two months leading up to the election – that would mean almost $50 million a week. McCain's donors number a few hundred thousand. Barack Obama has a rolodex with 1.5 million names in it. Unless John McCain can figure out a way to fatten his wallet, it could be a long slog to November.

Conservative estimates put Obama's fundraising haul for the general election at about $300 million, an amount that would allow the Democrat to compete in more states than McCain. It could also force McCain to spend money in states that should normally be safe territory for the GOP.

Meanwhile, the Democratic Party announced today that it would not accept contributions from Washington lobbyists, putting it in line with Obama's campaign pledges. Howard Dean and the Obama campaign say that the American people's priorities, not the special interest groups, will set the agenda in a potential Obama administration.

Here’s my question to you: How can John McCain compete with Barack Obama's fundraising abilities?
Interested to know which ones made it on air?

END_OF_DOCUMENT_TOKEN_TO_BE_REPLACED

How is Clinton handling her exit?

Hillary Clinton is offering Barack Obama half a loaf on her way out the door. No joint appearance with the presumptive nominee and their families in prime time – which would be carried live on television. No appearances by folks like Harold Ickes and Terry McAuliffe who ran her campaign telling her supporters to unite behind Obama. No appearance by Bill saying "let bygones be bygones, and I'm going to offer to work hard to get Barack Obama elected."

Instead Senator Clinton is planning a public appearance on Saturday to talk about how "we can rally the party behind Senator Obama. The stakes are too high and the task before us too important to do otherwise."

Meanwhile, it turns out Clinton had to be pushed to get out of the race by several of her Democratic congressional colleagues... and reportedly she didn't even bother to call Obama to tell him of her decision. One more thing, and it's important: Clinton is expected to suspend her campaign instead of dropping out altogether. That means she will technically remain a candidate, and she will hold on to her delegates.

Some Obama supporters worry that questions about what Clinton does next will turn into a "second campaign" that won't end until Obama chooses a running mate, a job that Clinton is apparently interested in even though no one has asked her.

Mike Lupica writes in the New York Daily News that even at the end of this, Clinton is trying to rewrite the party rules that her people helped write in the first place, adding: "She acts as if she is the shadow president of a constituency that includes the 18 million people she says voted for her, as if those votes belong to her, as if all 18 million people are waiting for her to give them their marching orders. She leaves the race with the same air of entitlement with which she entered."

Here’s my question to you: How would you describe the way Hillary Clinton is handling her exit from the race?