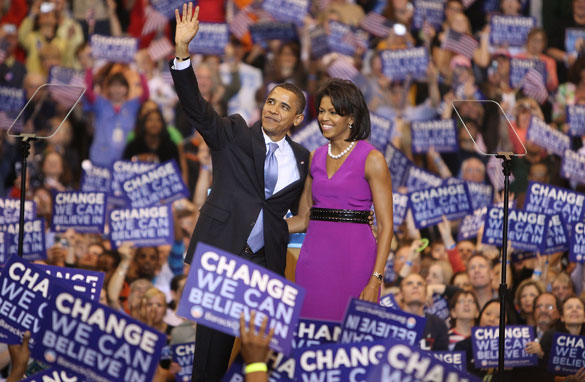 Barack Obama made history last night. Big time. He is the first African-American presidential nominee for a major party in more than 230 years. And, he could become the first black President of the United States.

The Washington Post says the phrase "black president" was once unthinkable, triggering expectation, fear and incomprehension all at once. And while racism is still around – perhaps it no longer exists at the level that makes a black president unthinkable.

It's pretty heady stuff. The Times of London writes that last night "the ultimate realization of the American dream moved a little closer." A top socialist leader in France called Obama's candidacy "an historic choice." In Pakistan, the editor of one top newspaper says everyone is impressed with this moment... and says many in his country believe Obama would better serve Pakistan's interests. The editor of a Danish newspaper says Obama's multiethnic background could foster understanding between the U-S and other countries.

But before we get carried away, it's clear Obama has a long way to go when it comes to race and the election. Exit polls from the primaries show 1 in 7 white Democratic voters said race was important in their vote. Two-thirds of that group supported Hillary Clinton... and more than half of them say they'd rather vote for John McCain or sit out the general election than support Obama. And those are Democrats. We don't know how many Republicans and independents will take race into account when voting. But we're going to find out.

Here’s my question to you: What message does it send to the world that an African-American is his party's likely nominee for president?

END_OF_DOCUMENT_TOKEN_TO_BE_REPLACED 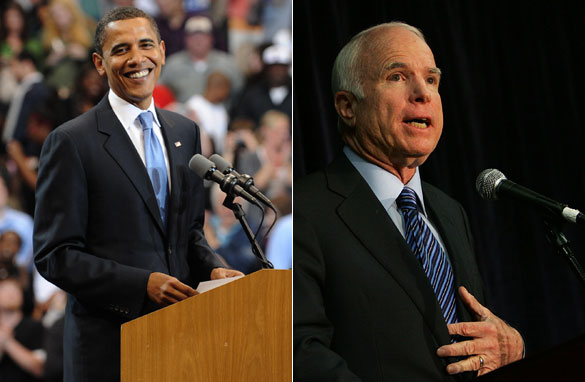 The game is on. And voters have two very different candidates to choose from to be our next president. John McCain and Barack Obama presumably won because they were the strongest candidates of their respective parties, but both men have issues they'll have to overcome if they want to win.

Exit polls from the primary season show that both candidates' problems start with the economy – the number one issue for voters this election. McCain and Obama failed to get even half the votes from people worried most about the economy.

When it comes to Republican John McCain, he has his work cut out for him. He never got strong support from the traditional Republican base – people who strongly oppose abortion, are born again or evangelical Christians, or support tough actions against illegal aliens.

Also, even though McCain gets high scores for "experience" – a quality only about 25% of Republicans were looking for, more want a candidate who shares their values – and McCain only managed to get a quarter of them.

As for Obama, he hasn't scored well among working-class whites and Hispanics – getting only about 1 in 3 of each of those group's votes. He also has to get the backing of white Democratic women who heavily supported Hillary Clinton. And, there's the question of race, and whether it will keep voters from supporting Obama. As for voters over 65 years old, that's the age group where Obama was the weakest in the primaries and where McCain did best.

Here’s my question to you: What are John McCain’s and Barack Obama’s greatest weaknesses?
Interested to know which ones made it on air?

END_OF_DOCUMENT_TOKEN_TO_BE_REPLACED

How should Obama handle the Hillary “situation”? 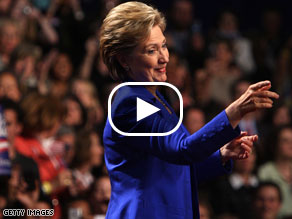 Anyone who thought Hillary Clinton would admit defeat and graciously make her exit to begin healing the party wasn't paying attention last night.

Barack Obama won the Democratic nomination, not by a delegate or two. The superdelegates poured into his camp all day and all night and made a bold statement. "He's our guy." But when the sun came up this morning, she is still there.

If Obama wants a hint what it will be like if she is the vice president, last night should give him a pretty good idea. Refusing to concede, she chose instead to try to steal the spotlight from him on one of the most historic nights in our history. Barely acknowledging his accomplishment, she went on in her speech at Baruch College like nothing had changed. It was pathetic.

Earlier in the day, she let it be known she is interested in the Vice Presidential nomination. Like it's her option. This puts enormous pressure on him to agree or risk further angering her dwindling supporters. Not that some of them could get any angrier.

Barack Obama at this moment has a much bigger problem with Hillary Clinton than he does with John McCain. You would think her advisers and supporters would start to be embarrassed by her behavior at some point.

At a time when our country should be celebrating a quantum leap forward in healing our racial divisions, Hillary Clinton is ruining the party – a spoiled child who refuses to go when told, "It's bedtime."

Here’s my question to you: How should Barack Obama handle the Hillary Clinton “situation”?