Can Clinton muscle her way into V.P. slot? 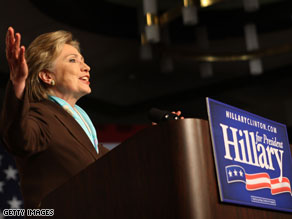 Senator Hillary Clinton is reportedly trying to muscle her way onto the ticket as Barack Obama's vice presidential candidate.

Politico reports a senior Obama adviser says that some Clinton supporters are "pushing real, real hard to get her on the ticket." According to Time Magazine, one of those supporters is her husband, former president Bill Clinton, who apparently thinks his wife has earned a place on Obama's ticket.

Clinton's wins in key states like Ohio, Pennsylvania and West Virginia – along with her support from women and white working-class voters – are all strong arguments why Obama should include her.

However, the unnamed Obama adviser suggests Clinton would "take away" from the ticket, citing her "baggage" and the fact that a majority of voters think she's "dishonest." It would also detract from Obama's message of "change," and a shift away from politics as usual.

This aide believes Obama will wind up attracting a lot of Democratic women who have been voting for Clinton, once they have the choice between Obama and McCain. Also, this person claims that even though Clinton attracts some white voters Obama hasn't been getting "some of them will never vote for Obama anyway."

But not everyone agrees that Hillary Clinton would weigh down the ticket. One former congressman and associate of the Clintons says putting Hillary on the ticket makes sense. He says the race is "as close to a tie" as anything in recent memory and uniting the two candidates would merge the party.

Here’s my question to you: Can Hillary Clinton muscle her way into the V.P. slot?
Interested to know which ones made it on air?

Connie writes:
In the end, I don't think Hillary Clinton's being on or off the ticket will be the deciding factor in November. Voters will choose Obama or McCain based on how they feel about those two men, not the VP candidate. I think Clinton would like very much for Democrats to believe she must be on the ticket for Obama to win. It's just another desperate ploy by Hillary and Bill to get back into the White House. Heaven help Obama if she does.

Jenny from Rome, Georgia writes:
Jack, Judging from the decisions he has made so far in this campaign, Obama is not that stupid. He seems to have surrounded himself with an excellent team and Hillary is not a team player.

Bruce writes:
No! But Barack Obama is stupid if he feels he can win this election on his own without the help of Hillary Clinton. The Democratic Party is split down the middle… Obama needs to stop seeing Clinton as his opposition and see her as a benefit. If the Democrats want to ensure that they take back the presidency, it's going to take a combined ticket regardless of who is the presidential nominee.

D. writes:
She is setting up a two-pronged victim stance. First, the Gore (read Clinton) 2000 election where he/she lost to the Bad Bush (read Obama). The second: where she can play the race card again by being the victim of the scary, powerful, moneyed black man against the underdog female. She is a hopeless piece of baggage - totally lacking in ethics.

Jan from Boca Raton, Florida writes:
Let’s hope so. Somebody has to save this country.

Susan writes:
I hope not. As a white, middle class woman, registered Republican and wife of a navy man, I am rooting and supporting for Sen. Obama because he is running on a change campaign. If he folds and puts Sen. Clinton on the ticket as VP then I will not vote for him… Sen. Clinton is a typical politician… She is not one of us.