What should the U.S. do now to address future oil shortages? 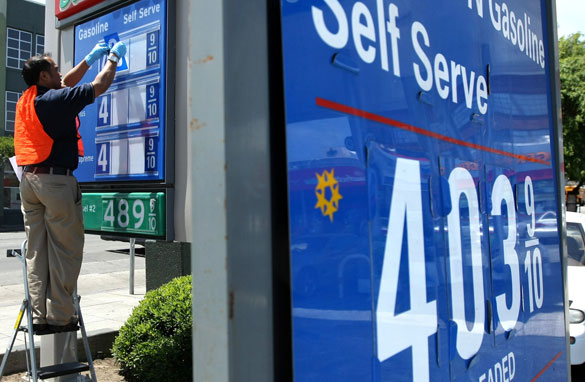 The day of reckoning may soon be upon us. Crude oil hit a record high of more than $133 a barrel today, after a government report that stockpiles of gas and oil have fallen unexpectedly.

But that's not the worst of it. Fears of oil shortages within 5 years actually pushed long-term oil futures to almost $140 a barrel yesterday. The Financial Times reports veteran traders say they've never seen such a jump, and that they believe more and more investors are betting that oil production will soon peak.

One influential investor says he thinks oil prices will hit $150 a barrel by the end of the year. And Goldman Sachs is predicting oil could top $200 a barrel within two years, which could mean gasoline at $7 or $8 a gallon.

All this comes as global demand for oil is increasing much faster than supply, especially in places like China, India, the Middle East and South America.

Crude oil prices have more than doubled just in the past year... something most Americans have felt at the pump, with a gallon of gas now costing $3.81 on average. According to AAA, the price of a gallon of regular unleaded gasoline hit a record high for the 14th day in a row. That has never happened before. What will we do when gas hits $7 a gallon?

Here’s my question to you: What should the U.S. be doing now to address possible oil shortages within five years?

END_OF_DOCUMENT_TOKEN_TO_BE_REPLACED

He urged the media, for example, to focus on important policy issues an "not just why Barack [doesn't] wear flag pins on his lapel."

John McCain's chief media consultant is leaving his campaign because he doesn't want to work against Barack Obama.

Mark McKinnon says he's staying true to a vow he made months ago not to campaign against Obama. At the time, McKinnon said the election of Obama "would send a great message to the country and the world." Although McKinnon says he disagrees with Obama on issues like Iraq and he thinks McCain would make the best president, he still doesn't want to work against the likely Democratic nominee.

McKinnon insists he'll remain a "friend and fan" of McCain's campaign. He says he's just "moving from middle linebacker to cheerleader" for McCain.

McKinnon's resignation could symbolize some of the challenges John McCain might face running against an historic candidate like Barack Obama. In many ways, McCain is entering uncharted territory by running against the first black presidential candidate from a major political party.

Meanwhile, McKinnon becomes the sixth adviser to leave the campaign in recent days. And John McCain is now taking some heat from fellow Republican Senator Chuck Hagel. The Huffington Post reports Hagel says he's "very upset" with some of the things his longtime friend, McCain, has been saying. Hagel is especially disappointed with some of McCain's comments about Iran, as he attacks Obama on foreign policy. Hagel says he thinks McCain "is smarter than some of the things he is saying" and hopes there will be a "higher-level discourse" come the general election. This is from his friend.

Here’s my question to you: What’s the significance of a top McCain adviser resigning because he doesn’t want to work against an historic Obama candidacy?

END_OF_DOCUMENT_TOKEN_TO_BE_REPLACED

Why is Hillary Clinton still in the race?

Clinton has said to her camp she will stay in the race until June because she believes she can still be the nominee. Click the Play Button to see what Jack and our viewers had to say. (PHOTO CREDIT: AP PHOTO)

Barack Obama took another big step toward becoming the Democratic presidential nominee last night. He now has a majority of the pledged delegates – which means it is now impossible for Hillary Clinton to catch him. He also reminded those superdelegates who remain uncommitted that if they endorse Clinton now, they will be going against the will of the voters.

None of this matters to Hillary Clinton. She's staying in, telling supporters she's determined to see every vote counted. She's $19.5 million in debt, hopelessly behind and probably further damaging the party's chances in November, but no big deal. This is all about Hillary.

The New York Times reports she has told her inner circle she thinks she can still be the nominee. And, if she isn't, she can still accomplish some final goals. For one thing, Clinton is now saying that sexism – not racism – has played a key role in her loss. Advisers say by fighting on she's showing young women she's not a quitter.

Clinton clings to the hope that Michigan and Florida will magically be awarded to her despite both states primaries being invalid. She'll press that case when the DNC rules committee meets at the end of the month.

Oh, and about those who say Clinton is dividing the Democratic Party, or causing more of a racial divide among some white voters, by staying in the race, she disagrees. She believes that if and when she quits, her supporters will quickly support Obama.

Here’s my question to you: Why does Hillary Clinton continue on when Barack Obama now has a majority of pledged delegates and her campaign is almost $20 million in debt?