Should speed limit be lowered to 55 mph?

Click the Play Button to see what Jack and our viewers had to say.(PHOTO CREDIT: AP PHOTO)

Gasoline prices rose to a record today – for the 8th day in a row. The AAA says the national average for a gallon of regular unleaded is now $3.78. That's a 12% increase in just the last month. $4 a gallon is clearly in sight now, and if some experts are right, it could go a lot higher.

Surveys show that drivers have been changing their habits in order to cut fuel costs. They're doing things like shopping for cheaper gas or putting less in the tank instead of filling up. But how about slowing down?

Cars are most fuel efficient when driven between 30 mph and 60 mph. Above 65 mph, mileage drops sharply. This isn't rocket science. If drivers are forced to slow down, we would all use less gasoline. And if demand went down, prices might just follow.

One expert says reducing highway speeds from 70 mph to 60 mph would reduce gasoline consumption between 2% and 3%. That could translate into a price reduction of as much as 10%. At today's price, almost 38 cents a gallon.

This is exactly what happened in 1974 during the Middle East oil embargo. President Nixon and Congress imposed a national speed limit of 55 mph. Congress repealed the national speed limit law in 1995, and today there are 32 states with speed limits of 70 mph or higher. In Texas, you can even drive 80 mph on some roads.

But there doesn't appear to be much interest in Congress for a new national speed limit. John McCain and Hillary Clinton would rather pander to voters with the idea of a three-month vacation from the 18 cents a gallon federal gas tax which will never happen. And if it did, would save drivers a whopping 70 bucks.

Here’s my question to you: Should the highway speed limit be lowered to 55 mph to conserve gasoline?

END_OF_DOCUMENT_TOKEN_TO_BE_REPLACED

Should Republicans run away from McCain? 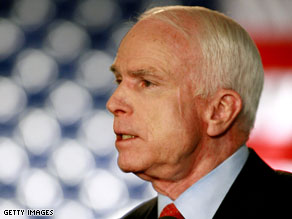 John McCain peered into the future this morning... delivering a speech that looked ahead to what the U.S. and the world would be like in 4 years, after the first term of a McCain presidency.

Some of the highlights: he thinks the Iraq war will be won, Iraq will be a functioning democracy and violence there will be "spasmodic and much reduced." McCain believes the U.S. will have welcomed home most of its troops. He thinks the threat from al Qaeda and the Taliban won't yet be eliminated – even though bin Laden will be captured or killed. It's a pretty bold move to lay out objectives like this – gives critics a lot to measure you against.

In any case, John McCain seems to be one of the few things Republicans have going for them this fall. After a string of GOP defeats in special elections, many are hoping that the maverick appeal of McCain will help other Republicans on the ballot. This is all kind of ironic, when you consider the Arizona senator has been at odds with his own party for years on issues like immigration, campaign finance reform and global warming.

But Republicans are facing a dismal scenario. One GOP congressman is calling this year's political atmosphere "the worst since Watergate" adding "the Republican brand is in the trash can... if we were dog food, they would take us off the shelf."

Some folks are predicting Republicans could come out of November with a 70 seat deficit in the House alone.

Here’s my question to you: Should Republicans facing congressional races in November run away from – or run with – John McCain?

END_OF_DOCUMENT_TOKEN_TO_BE_REPLACED 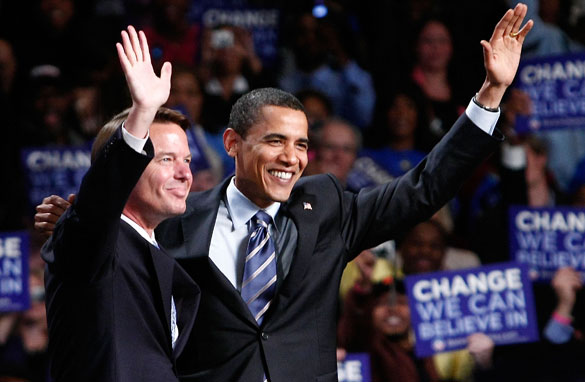