Are the Democrats wounded beyond repair? 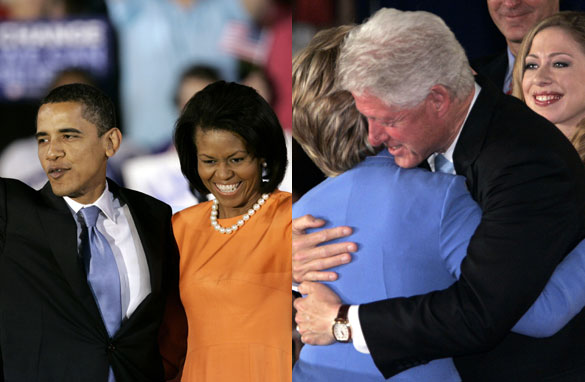 At least that’s according to the cover of the latest issue of Time magazine. There seems to be a collective sigh of relief that this race between Obama and Hillary Clinton is all but over. Many believe it's just a question now of how Hillary Clinton will choose to make her exit. Will it be graceful? Or will it be something else?

This might give us an idea. Beneath the surface there are things lurking that could taint this sense of celebration and unification of the Democratic Party. Not only is Hillary refusing to go quietly, she's refusing to go at all. And despite her repeated assurances that she will be a team player in the fall, Clinton is still out there making some pretty incendiary remarks about race.

Clinton told USA Today she will be the stronger nominee because she appeals to a wider coalition of voters. She said, "Obama's support among working, hard-working Americans, white Americans, is weakening again, and whites in both states [meaning Indiana and North Carolina] who had not completed college were supporting me." Clinton says this shows an emerging pattern… that whites are voting for her. The Obama camp calls these statements untrue and disappointing.

Then there was Clinton supporter Paul Begala right here on CNN Tuesday night. He said that Democrats couldn't win in November with just, "eggheads and African-Americans." This all makes it seem like there's a long way to go before the Democratic Party can make any claims to being united.

Here’s my question to you: Are there wounds in the Democratic Party that just won't heal?

END_OF_DOCUMENT_TOKEN_TO_BE_REPLACED 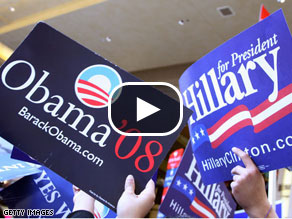 Now that Barack Obama appears on the verge of becoming the Democratic nominee, the buzz about a so-called "dream team" is starting up again.

ABC's George Stephanopoulos says that there are "intermediaries" discussing the possibility of an Obama-Clinton ticket. And he thinks Clinton "would be under some pressure and would like to accept." Former congressman Harold Ford also says an Obama-Clinton ticket is something the Democratic Party is going to have to seriously consider in the next few weeks.

There's even a group called "Vote Both” that's trying to push for such a ticket. It's seen as a way to unite the party after an often bitter campaign. A recent poll found a majority of both Clinton and Obama supporters like the idea.

But, not so fast. Obama's campaign says the Illinois senator is still focusing on the upcoming races and undecided superdelegates, that it's premature to talk about running mates.

The Clinton campaign says it hasn't had any discussions with the Obama camp about the ticket, and spokesman Howard Wolfson says he hasn't heard Clinton express any interest in such a ticket.

Some Democrats aren't so sure it's a good idea. One strategist who supports Clinton told Reuters if Obama picks her as his number two, it would counter his message of change. The same person said it might not be "all that useful" to Clinton's political future to be vice president. Instead she could have "an enormous influence" in the Senate over a long period of time.

Here’s my question to you: Should Barack Obama offer Hillary Clinton the number two spot on the ticket as a way of getting her to quit the race now?