Has your perception of the candidates changed? 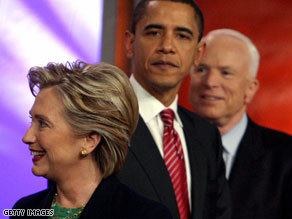 Over the course of the campaign, Americans' views of the top three candidates have changed some. According to a Gallup poll done in late April, here are some of the qualities associated with each:

John McCain: he's "too old, he's a "good man, likable," he would give the country more of the same - be another George Bush, and he has a "good military background." And the number of people who view him favorably are about equal to the number who don't like him.

When it comes to Hillary Clinton, the most common perceptions are that she is dishonest or not trustworthy, past scandals or baggage associated with her husband, the former president, that she is qualified, capable, and strong.

But the number of people who have a negative view of her, 55%, is almost twice the number that view her favorably, 30%. Barack Obama is viewed slightly more positively than negatively, 42% to 39%.

People see him as young and inexperienced but with new ideas. He is also seen as lacking substance-all talk and no action. People disagree with his religious views (Thank you Rev. Wright) and he is seen by some as an "elitist" or "snob," although those views are not widely held.

He is also, of course, much better known now than when the campaign began.

Here’s my question to you: How has your perception of the three major presidential candidates changed during the course of the campaign?

END_OF_DOCUMENT_TOKEN_TO_BE_REPLACED

The GOP is unpopular, but is McCain?

Republicans are going to have a very tough time getting elected this fall, except maybe for John McCain.

The latest Wall Street Journal/NBC News poll shows only 27% of voters have positive views of the Republican Party.

It's the lowest level for either party in the almost 20-year history of this particular poll. The last time the numbers were this low, voters threw George Bush's father out of office and elected Bill Clinton in 1992.

And yet John McCain, the presumptive Republican nominee, continues to run about even in hypothetical match-ups with both Hillary Clinton and Barack Obama.

Interesting in light of the fact that an overwhelming number of us, 73%, think the country is headed in the wrong direction under President Bush. John McCain embraces many of the policies of President Bush, including the war in Iraq, which Americans have really had enough of. And President Bush has now achieved the highest disapproval rating of any president in modern American history.

And it's not just the war that has American voters in a foul mood. Our economy is struggling under the weight of high gas prices, the housing collapse and a loss of jobs. All things that have happened on the Republicans' watch.

A majority of voters say they want a Democrat in the White House next time. Which makes John McCain's position even more remarkable.

Here’s my question to you: Why does John McCain remain popular in light of sharply falling support for the Republican party?

END_OF_DOCUMENT_TOKEN_TO_BE_REPLACED

How important is the issue of immigration to you? 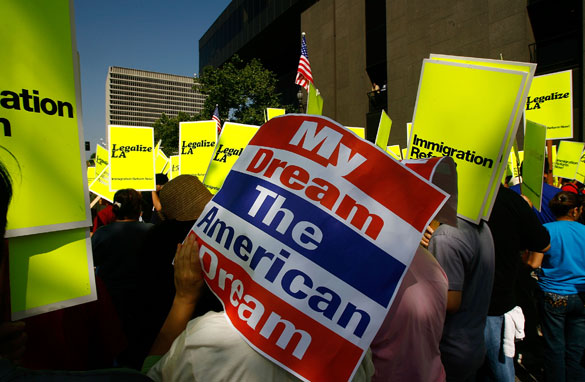 For the last two years, May first has been the day that the estimated twelve million illegal immigrants in this country have the opportunity to rally for immigration reform. Two years ago, the turnout nationwide was staggering. More than one million people packing the streets and bringing traffic to a standstill. Chicago alone had four hundred thousand people. But yesterday they were nowhere to be found.

In Tucson, Arizona, only about 500 turned out yesterday, compared to 12,000 last year. In Los Angeles, a few thousand, nothing close to the 500,000 in 2006. And the streets in Phoenix were empty yesterday... no signs of the activists and banners of the last two years.

Gone too were the calls for a nationwide boycott of businesses and work. The Spanish-language D.J.'s who had heavily promoted previous marches, for the most part, stuck to regular programming yesterday.

So why the change? Some say growing deportation fears kept folks home. The United States deported almost 300,000 people last year, a 44% increase over the previous year. Others say it was because of the stalled effort in Congress to revamp the immigration law.

And then there's the heated race for the White House. The immigration issue seems to be lost in other political headlines. The top concern for voters overwhelmingly is the economy, not immigration.

Here’s my question to you: Is illegal immigration less important to you than it was two years ago?