Can our mission in Iraq be accomplished? 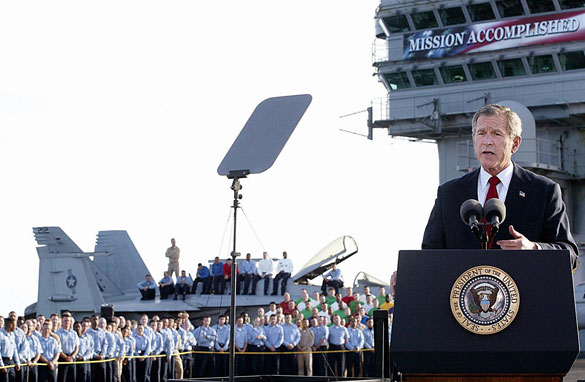 Mission Accomplished... so read the banner prominently displayed behind President Bush on the flight deck of the USS Abraham Lincoln five years ago today.

Bush appeared in a flight suit before a cheering crowd and announced "Major combat operations in Iraq have ended." I wonder if he would like to tell that to the families of the more than 50 U.S. troops who died in Iraq during the month of April, the deadliest in seven months. And this month’s first fatality has already been recorded.

The war is now in its sixth year. We have lost 4,064 troops, many of them killed long after the president announced that major combat operations were over.

Only the Vietnam War, the war in Afghanistan, and the Revolutionary War have lasted longer than the war in Iraq.

Tens if not hundreds of thousands of Iraqis have been killed and millions have been displaced. The Iraqi army which was supposed to be able to stand on its own by 2006, is pretty much worthless. During one recent battle more than 1,000 Iraqi soldiers simply ran away leaving the fighting to their countrymen and the Americans.

Today U.S. and Iraqi troops are engaged in fierce fighting against Shiite militants in Baghdad's Sadr City, a battle that began in March. More than 900 civilians and militants have died since that fighting began.

The White House admits that it has "paid the price" for the "Mission Accomplished" banner. But not nearly as high a price as the men and women of our armed forces.

Here’s my question to you: What will it take to accomplish the U.S. mission in Iraq?

END_OF_DOCUMENT_TOKEN_TO_BE_REPLACED

How can the GOP attract young voters? 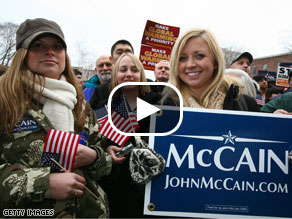 If you want to know which way the political winds are blowing, look at the young. Trends in the opinions of the youngest voters are often a barometer of shifting political tides. For the Democrats as we approach the 2008 election, this is great news. For Republicans, not so good. In fact, terrible.

The Pew Research Center did a survey of young people between October of last year and March of this year. What they found was that the current generation of young voters who came of age during the George W. Bush years is giving the Democrats a wide advantage in party identification.

In fact, the Democrats' advantage among young voters is now so broad-based that younger men are now the only age category in the entire electorate where men are significantly more inclined to identify themselves as Democrats rather than Republicans.

And if you're John McCain, that's a big problem.

Here’s my question to you: Why can’t the Republican Party attract more voters under the age of 30?

END_OF_DOCUMENT_TOKEN_TO_BE_REPLACED

[cnn-photo-caption image= http://i.cdn.turner.com/cnn/2008/images/05/01/art.joe.andrew.ap.jpg caption="Joe Andrew is encouraging fellow Democrats to heal the rift in our party and unite behind Sen. Barack Obama."]

This could be the beginning of the end. The leader of the Democratic party under Bill Clinton is switching his support from Hillary Clinton to Barack Obama five days before the Indiana and North Carolina primaries.

Joe Andrew is a superdelegate who was chairman of the Democratic National Committee from 1999 to 2001. He's from Indianapolis and endorsed Hillary Clinton on the day she announced she was running for president.

Andrew is calling on Democrats to unite "behind Obama and heal the rift in our party." He says the primary process has devolved to the point that it's now hurting the Democratic Party.

He says Obama never asked him to switch his support. It was Obama's handling of the Jeremiah Wright controversy and his decision to oppose a summer gas tax holiday which Clinton and McCain are both in favor of that convinced him to switch.

Andrew's decision puts Barack Obama just 19 superdelegates behind Hillary Clinton now and could open the floodgates for more undecided superdelegates to make up their minds. He says the Democrats cannot wait any longer.

Here’s my question to you: What does it mean that the former chairman of the DNC, Joe Andrew, is leaving Hillary Clinton to support Barack Obama?