Has Rev. Wright swayed the superdelegates? 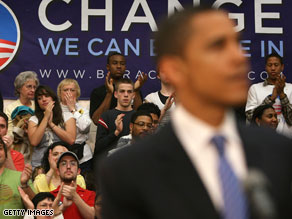 Ever since Super Tuesday, Barack Obama has been outscoring Hillary Clinton big time when it comes to picking up support from the superdelegates. The Wall Street Journal suggests he's close to taking the lead, and that if he doesn't stumble badly in Indiana or North Carolina next week enough of them will break his way after June third to give him the nomination.

Seems simple enough. He leads in pledged delegates and she can't catch him there. He's won more states, has more popular votes, is a much better fund-raiser - very important consideration - and has shown he can appeal to Independents and Republicans. Piece of cake. Just run out the clock and get ready for McCain.

Yesterday on this program former President Carter, who is a superdelegate, was asked if he would support the candidate he voted for in the Georgia primary. His answer was, "Yes, unless I change my mind."

And therein lies the problem for Barack Obama. Superdelegates are free to change their minds. And thanks to the angry tirades of a bitter old man who seems less like a pastor and more like a racist with each passing day, Obama could have a serious problem.

Here’s my question to you: Will Rev. Jeremiah Wright cause Democratic superdelegates to rethink their support of Barack Obama?

Larry from Ohio writes:
Jack, I don't think Rev. Wright alone will sway the superdelegates, but this body of baggage he now has such as Rev. Wright, Bill Ayers, the flag pin, not covering his heart during the pledge of allegiance, Michelle's comments, and bitter- gate. None of these things alone mean very much, but when you start listing to them, it almost makes him unelectable. What a catch-22! Hillary can't get the nomination and Obama can't win the election! John McCain thanks them very much!

Larry from Georgetown, Texas writes:
If the superdelegates give the nomination to Clinton because of this sick man, then we better get ready for a bloodbath in America. The title of your book will not even come close to what will happen in every major city.

Jenny writes:
I hope not. Hopefully, the superdelegates are able to see through this "Reverend" Wright character and look at the candidate who has the best chance of beating McCain and making the necessary changes in this country. It does not take a lot of effort to realize that Wright is an angry, bitter old man who is on a mission from someone to destroy Obama.

Jake writes:
The problem with the Obama/Wright story is it changes too quickly to gauge impact. By Thursday evening, we should have a better view. Yesterday, Obama picked up five superdelegates and Hillary 4. By the end of the day, who knows? And tomorrow...? Many of the superdelegates still hold elected positions. If they go against pledged delegates, you can assume they'll get tossed out.

Patricia from Boise, Idaho writes:
No way Jose. Now that Obama is free of Wright, he has paved the way for a flood–sorry–a trickle of superdelegates. I expect to see that as soon as today. Now that Michelle is talking again, her spunky, snarky personality will flesh out the person and we're ready to sail.

Jonathan writes:
Why hell no Jack. I'm a southern redneck white guy and if I could care less about Rev. “Dumb-ass,” then why should they?