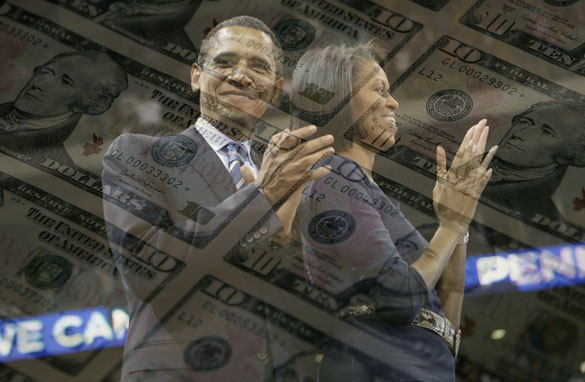 They're called "Hillraisers"...the people who raise the big bucks for Hillary Clinton's campaign. And based on recurring reports of money problems–unpaid bills, personal loans from the candidate, etc.–she can ill afford to lose any of them.

But NBC news was the first to report that Gabriel Guerra-Mondragon who has raised an estimated $500,000 for Senator Clinton is leaving to join Barack Obama's campaign as a member of his national finance committee. A formal announcement is expected this week. Guerra-Mondragon has reportedly become concerned about the increasingly negative tone of Clinton's campaign.

He is a former ambassador to Chile who was appointed by President Clinton in 1994 and joins a growing list of Clinton people who don't like what they see in Hillary's campaign. New Mexico Governor Bill Richardson and former labor secretary Robert Reich both are supporting Obama.

It's interesting to note that no one is leaving Obama's campaign to join Clinton.

Here’s my question to you: What does it mean if one of Hillary Clinton's major fund-raisers is leaving to join Barack Obama's campaign?

END_OF_DOCUMENT_TOKEN_TO_BE_REPLACED

Would you vote for McCain if he promised to serve only one term?

When it comes to John McCain, his age is an issue with some people. The senator from Arizona is 71 years old. If he is elected President of the United States he would be 72 on inauguration day…making him the oldest person ever sworn in for a first term. If McCain served his full two terms, he would be 80 when he left office.

McCain spent MORE THAN five years as a prisoner of war in Vietnam, and has suffered several bouts of melanoma…a potentially fatal form of skin cancer. His doctors assure us McCain is healthy and cancer-free…but so far his campaign has refused to release all of his medical records. We are told they will be made public some time next month.

In the meantime, reporters who are half McCain's age say they can barely keep up with the septuagenarian as he campaigns for the nation's highest office. Fourteen-hour days climbing on and off airplanes and buses and giving one speech after another are not uncommon.

And yet doubts persist. Being president ages a person in ways no other job does. The responsibilities are so big…the problems so important, that trying to handle them can take years off your life. Look at pictures of any president on inauguration day and compare them with pictures of the same man when he leaves office, and the effects are immediately apparent.

Here’s my question to you: John McCain have a better chance of being elected if he promised to only serve one term in office?

END_OF_DOCUMENT_TOKEN_TO_BE_REPLACED

Should Obama have accepted another debate?

Lincoln-Douglas made it famous...a debate with no moderator...but it doesn't look like it's going to happen between Obama and Clinton.

With just over a week to go before the Indiana and North Carolina primaries, and the two candidates running virtually neck and neck in Indiana, Clinton wants to debate Obama in both states, as a means of picking up votes in a race that he currently leads overall.

She says that she will debate him any place at any time, adding that it could even be done on the back of a flat-bed truck. He would probably prefer to run over her with a flat-bed truck at this point. She called over the weekend for this less-restrictive style of debate which got its name from a series of debates that took place during the 1858 U.S. Senate race between Republican Abraham Lincoln and Democrat Stephen Douglas.

She says that voters in Indiana would "love" to see that kind of debate and that it would be quote "good for the Democratic Party, it would be good for our democracy, and it would be great for Indiana." unquote.

Barack Obama has declined–saying that there will not be any more debates between now and the May 6th primaries. There have been 21 debates and Obama says he would spend time quote "talking to as many folks possible on the ground, taking questions from voters." unquote. But that's probably not the real reason. He's ahead...and the front runner traditionally would rather sit on the lead than take the chance of doing something stupid in another debate.

Obama's campaign has said repeatedly that most debates have offered little new information.

And he criticized the line of questioning in the last debate in Philadelphia earlier this month saying that it was more about "gotcha games" and "stirring up controversy" than the issues.

Here’s my question to you: Should Barack Obama have accepted Hillary Clinton's invitation to a Lincoln/Douglas-style debate with no moderator?