How much do rising food prices worry you? 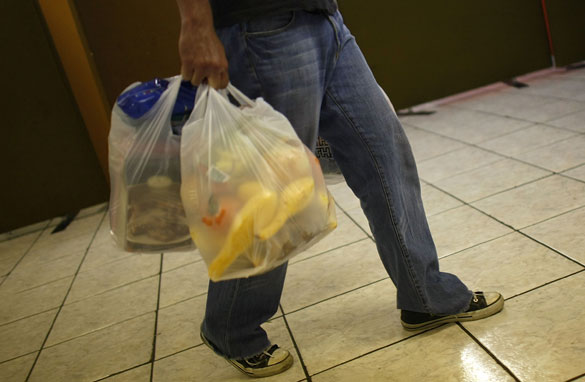 A man walks out of the Cristo Vive church with food supplies handed out to the needy March 5, 2008 in Hialeah, Florida. (PHOTO CREDIT: GETTY IMAGES)

The United States is known as "the breadbasket of the world." We have always had plenty of food, and it's always been cheap. Suddenly, not anymore.

A new USA Today-Gallup poll shows 73% of us are worried about rising grocery bills, and almost half say food inflation is causing a hardship for them.

Suddenly sharply rising food prices are right up there with the 80% of Americans who are concerned about record-high gasoline prices. According to AAA, the average price of a gallon of unleaded gas is now $3.53.

The government says that food inflation has been running at a 5.3% percent annual rate in the last three months. The largest price increases are for items like white bread, milk, eggs and bananas.

While higher prices are hurting Americans, they can wreak havoc in other parts of the world – places like Haiti, Pakistan, Egypt and India. The United Nations says that high food prices could mean more than 100 million people will go hungry.

Shortages and hoarding of some items are also leading some stores in the U.S. to ration food. Reuters reports Sam's Club is limiting sales of various kinds of rice "due to recent supply and demand trends." And it's been reported that a Costco warehouse in California is limiting purchases of flour, rice and cooking oil.

Here’s my question to you: How much of a concern are rising food prices in your household?

Scott writes:
It's hard when you can't afford the gas to get the food. Less meats and more canned soup. Less entertainment and more dry goods. Less air conditioning, etc. We've had to compromise everywhere, and it just makes life harder to live. We should be able to come home from work and relax, not rationalize every decision. I never thought I'd need a part time job to afford a bagged lunch.

Michael from Taiwan writes:
Jack, I live in Taiwan, the second most crowded country in the world. Rice prices in Asia have doubled in the past two years. While it has only affected the amount I can save each month to this point, there are many people who are struggling to buy rice, vegetables, and other necessary items…If it is a problem here, it is bound to become a much worse problem in the poorer countries in the region as well as those more dependent on imports like Japan and Korea.

Michele writes:
This is terrible! My family and I are forced to go to local food banks and pantries just to eat each month. I have never had to do this in the past. And get this, I'm employed! The portion of my paycheck that was allotted for food has gone to cover the high price of gas. What a catch 22.

Chris from Montana writes:
Jack, I'm a 22-year old man, about to be married in a month, and am scared that we won't even be able to afford an overnight honeymoon. With the cost of our housing going up, I'm afraid that even being stocked up on something such as bread could break us. It's scary, and pathetic.

Brad from Amarillo, Texas writes:
I am not so concerned for myself as I am for the potential for war in other countries. Not only are we supposed to be the breadbasket of the world, but we are supposed to be the world’s police. (As long as the country in question has oil, i.e. Iraq vs. Darfur) Lately we have overstretched our military, spent billions, and accomplished nothing. What are we going to do when more and more countries descend into chaos?

Mary from Alabama writes:
Rising food prices concern me a hell of a lot, as does the price of everything else. I'm a senor citizen, but still like the taste of food.