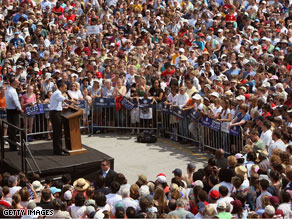 Peter from Fairview, Texas writes:
Neither has the advantage. When they leave Pennsylvania, neither will have won much more then half the delegates in the state therefore neither will be any better off. If Hillary Clinton does not win by a very large margin, she will have nothing to offer the superdelegates as far as why she should be the nominee over Obama.

Barbara from Hazleton, Pennsylvania writes:
Jack, Of course Clinton will have the advantage with roots in Pennsylvania, but it won't matter anyhow –she's not going to be the Democratic nominee when all is said and done. It'll be Obama.

Tom in Greenville, South Carolina writes:
It is Hillary, substance over charisma in a big way.

Lynn from Tennessee writes:
Jack, Hillary has a slight advantage in Pennsylvania but in the long run I believe Barack Obama will get the nomination and hopefully the election in November. Her ad that came out today featuring among others Osama bin Laden shows what a fear mongerer she really is, and that is not something needed in this country at this time.

Michael writes:
Jack, I am a retired business agent, and there is tremendous pressure on the union members to tow the leadership line publicly. I believe the rank and file in the privacy of the voting booth will break for Obama. I am voting for Obama as is my wife, and by the way my union has supported Clinton.

Mary writes:
Hillary has the advantage, but it is not going to help her. We are angry and bitter out here even if you media pundits won't acknowledge it.