Good thing for a president to be superstitious? 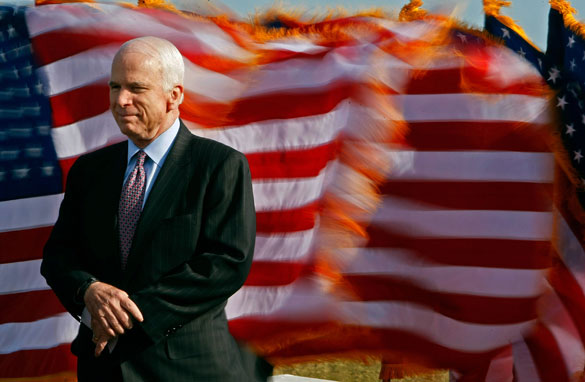 Here's something you may not know about the Republican presumptive nominee John McCain: he's very superstitious.

The Washington Times reports on some of McCain's more well-known rituals. For example, he won't throw a hat on a bed – bad luck. He carries a lucky feather - wonder what that's for, a lucky compass, and a lucky penny, nickel and quarter. One staffer says he had so many coins at one point "it was like a change purse in his pocket."

And the senator's superstitions are rubbing off on some members of his campaign staff. One top adviser says he grew a beard during the 2000 campaign and didn't shave it until the race was over. He says he's probably doing the same thing this time around. Another adviser says when someone recently mentioned winning the general election in November, three staffers immediately knocked on wood so not to jinx anything.

If elected, McCain wouldn't be the first superstitious president. FDR used to invite his secretary along if there would be 13 people at a dinner and he never traveled on the 13th day of the month. And Ronald Reagan carried around a lucky coin and gold charm with him, knocked on wood, and never walked under ladders.

Here’s my question to you: Is it a plus or a minus for a president to be superstitious?
Interested to know which ones made it on air?

END_OF_DOCUMENT_TOKEN_TO_BE_REPLACED

Bill Clinton: older voters too savvy to fall for Obama

Bill Clinton says older voters are supporting his wife because they're too smart to be fooled by Barack Obama's rhetoric.

The Boston Globe reports the former president also took issue with Obama's statement that many of the problems the U.S. faces were around long before President Bush took office.

Clinton told voters in Pennsylvania: "I think there is a big reason there's an age difference in a lot of these polls. Because once you've reached a certain age, you won't sit there and listen to somebody tell you there's really no difference between what happened in the Bush years and the Clinton years; that there's not much difference in how small-town Pennsylvania fared when I was president, and in this decade."

See, it's really not about Hillary… it's about Bill's legacy.

On another note, a new poll out might spell trouble for Hillary among voters of all ages. A Washington Post/ABC News poll shows only 39% of Americans think Hillary Clinton is "honest and trustworthy." 58% say she's not. Barack Obama leads Clinton by 23 points when it comes to which one voters think is more honest.

Apparently Clinton's fairy tale about sniper fire in Bosnia, and her husband's defense of her claims, didn't help much... especially when voters combine it with scandals that occurred while she was first lady, including the firings in the White House travel office and her financial dealings which resulted in widespread doubts about her trustworthiness.

Here’s my question to you: Bill Clinton says older voters are too savvy to fall for Barack Obama. Do you agree?