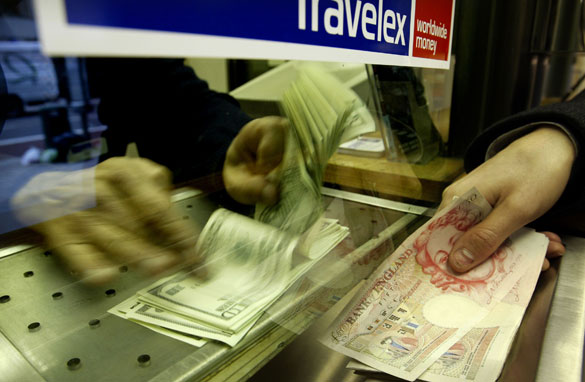 The growing cost of the Iraq war is one of the main reasons our economy is struggling.

Congressman John Yarmuth of Kentucky said in the Democrat's weekly radio address that the Iraq war, now in its sixth year, has cost the U.S. more than half a trillion dollars. Yarmuth says the conflict is quote "not only linked to our economic skid, but is a leading cause of it." He highlighted the crumbling infrastructure here at home while taxpayers fund an Iraqi government quote "riddled with waste, fraud and corruption."

A recent poll found 71% of Americans think that our spending on the war is a reason for our economic problems.

Meanwhile, a piece in today's New York Times looks at where else the U.S. could spend the estimated $1 to $3 trillion the war in Iraq could end up costing.

At the low end of the estimates of about 120 billion dollars a year... the money would pay for the projected cost of Hillary Clinton's universal health care plan. Or it could pay for Barack Obama's health care plan and his proposed bailout of homeowners submerged in the mortgage crisis. Or, it could pay for developing new renewable energy sources to get us off Mideast oil and a national public works program. Or, it could go toward a long-term fix for Social Security... or the unpaid part of Medicare… and on and on and on. Instead it's being used to finance a war that is going nowhere.

Here’s my question to you: How much is the Iraq war to blame for the state of the U.S. economy?

END_OF_DOCUMENT_TOKEN_TO_BE_REPLACED

The tsunami of voters to the polls looks like it will continue to sweep through states like Pennsylvania, North Carolina and Indiana.

In fact, more than a half a million people are either newly registered or have switched their registrations so they can weigh in on the Democratic primaries in those 3 states.

This shouldn't come as much of a surprise when you consider the tremendous interest generated by the race between Hillary Clinton and Barack Obama. Record voter registration and turnouts – particularly on the Democratic side – are what we've been seeing all along since the Iowa caucuses.

In Pennsylvania, where only registered Democrats can vote next Tuesday, more than 300,000 people have completed new registrations or switched to vote Democrat since the first of the year.

North Carolina, whose May 6th primary is open to Democrats and unaffiliated voters, has at least 122,000 people who are newly registered. And there could be even more new voters since a "same-day registration" law there lets people register and vote early between April 17th and May 3rd.

As for Indiana, its primary also on May 6th is open to all voters, and about 150,000 new ones have signed up since January 1st.

One expert on voting trends tells The Boston Globe that all this interest in the primary season quote "is an indication that we're going to see a very high turnout rate in the general election, perhaps as high as we haven't seen in a century in American politics."

But others question whether all the excitement will last and if new voters will remain engaged in politics after this presidential election.

Here’s my question to you: How does your interest in the 2008 elections compare to past elections?
Interested to know which ones made it on air?

END_OF_DOCUMENT_TOKEN_TO_BE_REPLACED

Barack Obama's comments about "bitter" blue-collar voters – who cling to "guns and religion" – have exploded into a "bitter" fight between him and Hillary Clinton.

Over the weekend, Clinton pounded Obama over the remarks, calling them "elitist and divisive" and suggesting they could kill the Democrats' chances of winning the presidency in November. She says Obama's words could alienate voters in Pennsylvania and other states that will soon vote.

Obama says he expected this kind of response from Republican John McCain, but not from his Democratic rival. When it comes to Clinton, Obama says "shame on her" and mocks her outspoken support for gun rights.

Clinton has told audiences that she supports the rights of hunters, that she once shot a duck in Arkansas and that she remembers learning to shoot on summer vacations in Scranton, Pennsylvania. To which Obama says "She's talking like she's Annie Oakley. Hillary Clinton's out there like she's on the duck blind every Sunday. She's packing a six shooter. C'mon! she knows better."

Trying to turn the tables, Obama insists it is Clinton who is out of touch with the concerns of blue-collar voters, saying she has accepted campaign contributions from political action committees and drug and insurance lobbyists.

Meanwhile, after appealing to gun owners and church-goers all weekend, Clinton refused to answer a question about the last time she fired a gun, saying "We can answer that some other time” and that it's not "a relevant question in this debate." She says she went to church on Easter.

Obama spent a lot of the weekend telling reporters his remarks were accurate, but badly phrased.

Here’s my question to you: How harmful will Barack Obama's "bitter" remarks be to his candidacy?