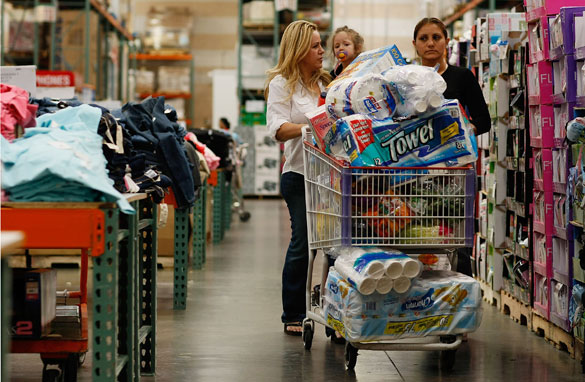 A new survey out paints a pretty bleak picture of middle class America today, which is no surprise when you take into account falling house values, increased costs for food, energy, health care, education and growing unemployment.

The Pew Poll finds that 54% of those who describe themselves as "middle class" – which is more than half of this country – say they are no better off than they were 5 years ago. That's the worse outlook in more than 40 years.

And, the view for the future isn't much better. In the coming year, half of the middle class surveyed say they think they'll have to cut more spending. 25% of those employed are worried they'll be laid off, and 26% are concerned their salary or health benefits will be cut.

When asked who's to blame for their economic problems, 26% say it's the government's fault, 15% blame the price of oil and 11% say the people themselves are responsible.

Meanwhile, don't look for positive economic news on the horizon. The majority of economists polled by The Wall Street Journal say the U.S. economy has farther to fall. By a 3-to-1 ratio, they say our economy is in a recession, and almost three-quarters say we haven't hit the bottom yet.

Here’s my question to you: Who's to blame for an increasingly discouraged middle class?

END_OF_DOCUMENT_TOKEN_TO_BE_REPLACED

Some voters are worried John McCain will bring "old-fashioned" views into the White House if he wins.

Howard Dean, Chairman of the Democratic National Committee says that swing voters in focus groups raised the issue of McCain's age on their own.

McCain, at 72, would be the oldest president elected to a first term. Dean says voters were concerned about both his health and his outdated ideas. For example – Some women were shocked at his support for abstinence-only sex education and his opposition to health insurance paying for birth control pills. They reportedly said, "This guy is out of step with what modern views are." No kidding.

Dean says even though McCain's age is a factor for voters, he doubts the Democratic Party will use it as an issue during the general election, adding that "there's a somewhat higher ethical bar on our side of the aisle." Please.

Instead, Dean says the Democrats will portray McCain as "wishy-washy" on key issues, things like changing his positions on taxes and illegal immigration in order to win over Republican voters in the primaries. Of course, this flip-flopping argument is what partly did in Democrat John Kerry in the 2004 election.

The Republican National Committee dismissed the comments about McCain's age and said the upcoming election would be about "judgment, character, vision and leadership – all things voters associate with John McCain."

Here’s my question to you: Given John McCain’s age, will voters have an issue with what some see as “old-fashioned” ideas?

END_OF_DOCUMENT_TOKEN_TO_BE_REPLACED

Why is Bill Clinton bringing up Hillary’s Bosnia claims? 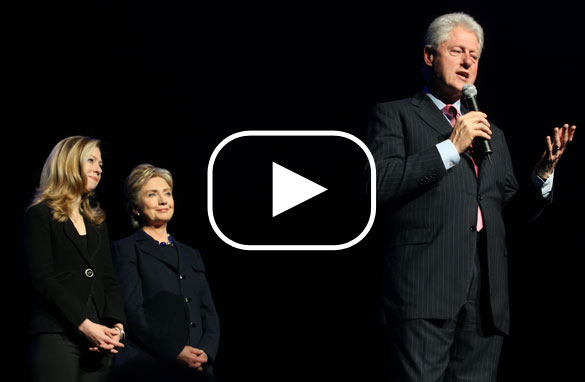 Just when talk about Hillary Clinton's tale from the tarmac in Bosnia was starting to die down, Bill Clinton decided to bring it up again.

Speaking in Indiana, the former president defended his wife's lie about "landing under sniper fire" during that 1996 trip.

He said that she made the comment "one time late at night when she was exhausted, misstated - and immediately apologized for it." Bill Clinton added that he believed Hillary was the first first lady since Eleanor Roosevelt to go into a combat zone and that the media treated her like she'd "robbed a bank", suggesting "some of them, when they're 60, they'll forget something when they're tired at 11 at night, too."

So now we have the former president lying about his wife's lie. Hillary Clinton made the comments about the Bosnia trip numerous times, not just once and not just "late at night." Once she told the fictional sniper fire tale early in the morning. In fact, it took about a week for her to correct herself – saying she "misspoke" and "made a mistake." And the Eleanor Roosevelt claim is bogus as well, since Pat Nixon traveled to Vietnam in 1969.

So why would a skillful politician like Bill Clinton re-ignite an issue that hurt his wife? You'd think he would know better. Unless it wasn't an accident.

In fact, Clinton brought up the Bosnia issue twice yesterday.

Hillary Clinton has since told her husband to knock it off. She said, "You weren't there. Let me handle it." His response? "Yes, Ma'am."

Here’s my question to you: Why would Bill Clinton voluntarily bring up the story of his wife's trip to Bosnia?