Why have so many Democrats changed their minds?

You have to give the Democrats credit: when they put on a show, it's not boring. Chaotic, self-destructive at times and fraught with melodrama… but not boring.

In the beginning, it was the inevitability and coronation-as-formality for Hillary Clinton. Then Iowa happened. 94% white, the only place whiter is the North Pole, and a black guy kicked Clinton's butt. Suddenly Barack Obama was a player and nothing was inevitable. But Clinton bounced right back in New Hampshire, and it was on to South Carolina, where it could be argued Bill Clinton cost his wife every African-American vote in the state. Again Obama was cruising, right into the Reverend Jeremiah Wright explosion. But Hillary Clinton rode to Obama's rescue with tales from the tarmac in Bosnia.

Along the way a lot of Democrats have changed their minds about whom to support. Actually more than a lot. A new Gallup poll shows about 1 in 4 Democrats have switched candidates. And at the end of the day, it's Barack Obama who has been changing the most minds in his favor.

19% say they've switched their support away from Hillary Clinton to Barack Obama, while only 7% have gone the other way – away from Obama and to Clinton.

The mind-changers come in all ages and both sexes, but consist of more non-whites than whites. And most of the switching among non-whites has also benefited Obama. Once African-Americans saw that Obama could win in an all-white state like Iowa, the floodgates opened.

Here’s my question to you: Why have so many Democrats changed their minds about whom to vote for in the primaries?

END_OF_DOCUMENT_TOKEN_TO_BE_REPLACED

What are the chances Obama becomes president? 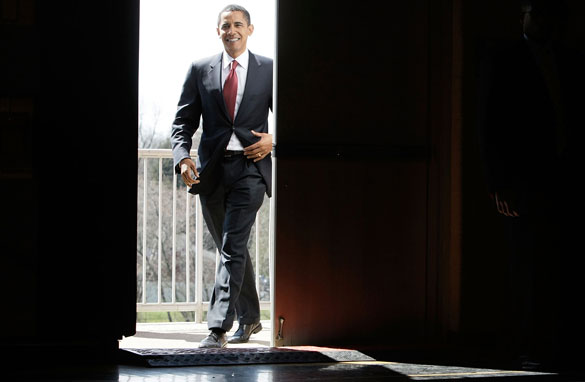 Barack Obama will win the Democratic nomination and the odds are he'll go all the way to the White House. So say the bettors in the prediction markets.

Reuters reports that traders in the Dublin-based "Intrade" market give Obama an 86% chance of being the nominee, versus a 13% chance for Hillary Clinton.

On the "Iowa Electronic Markets" at the University of Iowa, traders give Obama an 83% chance of winning, compared to 13% once again for Clinton.

Both groups of traders are also betting that Obama will ultimately become president. Intrade in Ireland gives him a 59% chance, compared to 49% for the Republican, and Iowa traders give him a 57% chance versus 46% for the Republican.

These traders are betting that Clinton will win several of the remaining primary contests – like Pennsylvania, West Virginia and Kentucky. Nevertheless, they suggest she has little chance of becoming the Democratic nominee.

These prediction markets have an uncanny record of accuracy. In some cases, they're more accurate than the polls. And when it comes to those polls, Obama continues to narrow the gap with Clinton in Pennsylvania, which will vote on April 22nd. He's cut down her once double-digit lead to an average of 6 points now. She was once up by more than 30 points.

Here’s my question to you: What are the chances Barack Obama will go all the way to the White House?