Chelsea says Lewinsky scandal is off limits, is she right? 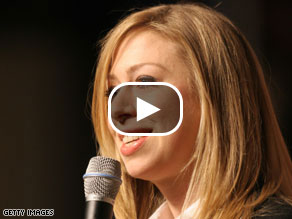 For the second time in two weeks, Chelsea Clinton has been asked a question about the Monica Lewinsky scandal.

Campaigning for her mother at North Carolina State University yesterday, a student brought up the scandal that lead to the impeachment of Bill Clinton. The student said Chelsea should have answered the question because it happened while her father was president of the United States.

But the former first daughter was having none of it, saying quote, "It's none of your business. That is something that is personal to my family. I'm sure there are things personal to your family that you don't think are anyone else's business either." Unquote

Chelsea also said she doesn't think people should "vote for or against my mother because of my father."

The student yesterday defended asking the question saying, "I feel that it is our business because he was president at the time."

Yesterday's encounter followed a similar one at Butler University last week when a student asked the former First Daughter whether the Lewinsky scandal had hurt her mother's reputation. Again Chelsea responded with, "I don't think that is any of your business."

While campaigning for her mother Chelsea has refused to answer questions from the press as well.

Here’s my question to you: Chelsea Clinton says the Lewinsky scandal is none of the public's business. Is she right?

Tom writes:
None of your business is the correct answer I' m surprised her father didn't say the same thing.

Marie from Noonan, Georgia writes:
No, that is not off limits. I think the student that asked if the incident damaged Hillary's credibility had every right to ask the question. Hillary's response was to blame a right-wing conspiracy. That was far from the truth. She knew her husband had been unfaithful in the past. I also feel that Chelsea gave the wrong answer. It is our business if they want us to vote for Hillary.

Greg writes:
A more interesting question to ask Ms. Clinton is could she please explain why she fully supported her mother's statement that they were under fire from snipers in Bosnia and had to run to armored vehicles for their safety when video evidence proved that none of that happened?

Erin writes:
It became the public's business when her father scandalized the oval office and trampled on the public trust. Chelsea and her parents seem to think she can be used as a specially protected arm of the Clinton machine, when, in fact, she should be no more protected from such questions than anyone else. I'd like to see Bill claim it's nobody's business. I think we ALL would have preferred not to know his sexual exploits but it was he–and he alone–who made it our business. Just another bed the Clintons have to learn to lie in Jack!

Joan from Orlando, Florida writes:
Yes Chelsea Clinton is absolutely right. The Monica Lewinsky scandal is over and people need to move on to more pressing topics like the economy, gas, healthcare and the Iraq war.

Paul from Scranton, PA writes:
Monica-gate should be off limits. This conversation should start and end with Bill. Hillary and Chelsea were unwilling bystanders.

Denise writes:
With all due respect to Chelsea, she is wrong. It is the public business because her father was the president of the United States of America and lied to the American people straight in our faces to cover his adulterous acts performed in OUR HOUSE. And finally, Chelsea is not a little girl anymore, if she can't take the heat, she should stay off the campaign trail.