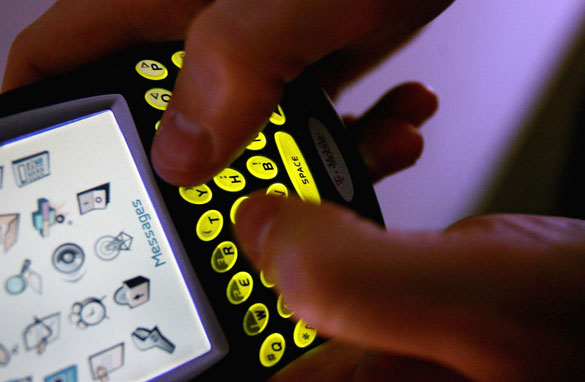 Before you sit down to write in to the Cafferty File, think about this: sending excessive e-mails and text messages could be a sign of mental illness – and some of you are on the margin. An editorial in The American Journal of Psychiatry suggests that these obsessive-compulsive symptoms are now so common that they should be included in an industry manual on mental disorders.

Here's how to tell if you need help:

– Excessive use, which often goes along with a loss of any sense of time when you're online.

– Withdrawal, which includes feelings of anger, tension or depression when you can't get to a computer.

– The need for a better computer, more software and even more hours of use.

– And, negative repercussions, which can include arguments, lies, and social isolation all due to your time spent online.

In South Korea, which has the highest use of broadband internet worldwide, internet addiction is considered one of the most serious public health issues. The government estimates that more 210,000 children are affected and need treatment, and another 1.2 million are believed to be at risk for addiction. In China, it's believed that nearly 14% of adolescent internet users are addicted... that's 10 million Chinese youngsters.

So it comes as no surprise that there are now internet addiction clinics around the world. Experts say it's also become a more significant legal issue in criminal, divorce and employment cases.

Here’s my question to you: Is sending excessive e-mails and text messages a sign of mental illness?

Jack from Somerset, Kentucky writes:
Jack, I have a 13-year-old grandson. We always enjoyed doing things together. He would listen to all my war stories and other lies with great zeal. Then he got a cell phone. Now he is insane.

Ralph from Long Island writes:
I’ll send you another comment on this topic 30 minutes after I take my medication.

Jim from Westchester County, NY writes:
Jack, I find it to be a strategy more than an illness. I would rather deal with matters in real time versus letting them pile up. Working in real time provides me with a more mobile lifestyle and actually allows me to spend more time with my family.

Stu writes:
People who use e-mail are crazy and eat their babies. It's true.

Mark from Berry, Kentucky writes:
Jack, This is my 137th answer to this question and the answer is still “No.”

Dave from Canada writes:
Oh, Jack. I just had to put down my burger, fries and bourbon to respond to this question. If I didn't write so many e-mails, I just wouldn't get any exercise at all during the day. Does sending you this e-mail mean I have a mental illness? Of course not. No more so the Cafferty Shrine I built in the secret room in my house.
David writes:
Jack, Are those internet addiction clinics offered on-line?

K. from Tacoma, Washington writes:
People who have "mental illness" are capable of making anything into a bad habit! We like to e-mail because it utilizes typing and office skills, along with composing letters and using the other side of the brain. It’s a positive exercise on a daily basis. But to the extent that it interferes with daily chores, errands, and the natural business, of running our lives? I would have to say no, e-mail takes a back seat, of course.