Should superdelegates back candidate with most pledged delegates?

A group of high-profile Hillary Clinton supporters is going after Nancy Pelosi.

Nearly 20 Clinton donors sent a letter to the House Speaker, criticizing her for her recent suggestion that the Democratic superdelegates should not overturn the election results. Pelosi has said it would hurt the Democratic Party if the superdelegates did not support the candidate who ends the race with the most pledged delegates. The Clinton donors want Pelosi to "clarify" her position.

The letter says Pelosi's take is at odds with the party's original intent on the role of superdelegates, those nearly 800 party insiders and elected officials who will likely decide the outcome of this race. The Clinton donors insist the superdelegates should look at a whole range of factors to help them decide who will be the party's strongest nominee in November.

Pelosi hasn't endorsed either Hillary Clinton or Barack Obama. Her office responded to this letter saying, "As chair of the convention, she is neutral and her position has remained the same throughout the primary season." She also repeated her position that the superdelegates should not "overturn the will of the voters."

The Obama campaign says the letter from Clinton donors is "inappropriate” and calls on the Clinton campaign to "reject the insinuation contained in it."

Here’s my question to you: Do you agree with House Speaker Nancy Pelosi that the superdelegates should support the candidate with the most pledged delegates?

END_OF_DOCUMENT_TOKEN_TO_BE_REPLACED

What does it mean if AT&T is having trouble finding skilled U.S. workers?

Say what? Reuters reports AT&T Chief Executive Randall Stephenson says the company is coming up short in finding enough Americans capable of filling the 5,000 customer service jobs it promised to bring back to the U.S. from India.

So far, about 1,400 of those positions have been returned to the U.S. The company set a goal of 5,000 jobs back in 2006 and says it still plans to stick to that target. But they're not having much luck.

Stephenson is particularly worried about the state of education, pointing to some parts of the U.S. where the high school dropout rate is as high as 50%. He says: “If I had a business that half the product we turned out was defective or you couldn't put into the marketplace, I would shut that business down."

The U.S. economy lost 63,000 jobs last month, which was the largest cut in 5 years. And, if the American public isn't educated enough to handle customer service jobs at AT&T and probably thousands and thousands of others with all different kinds of employers, these companies will have little choice but to continue shipping jobs overseas.

Here’s my question to you: What does it suggest about the state of this country when AT&T says it’s having a hard time finding enough skilled American workers?

END_OF_DOCUMENT_TOKEN_TO_BE_REPLACED 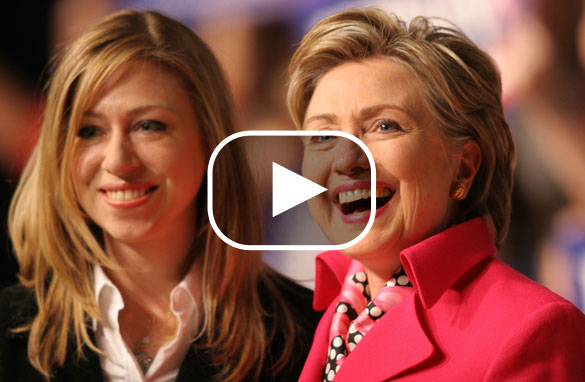 Sen. Hillary Clinton takes the stage with her daughter Chelsea before speaking at a fundraising event in Washington on Wednesday. Click the Play Button to see what Jack and our viewers had to say.(PHOTO CREDIT: GETTY IMAGES)

Hillary Clinton is taking a hit when it comes to how Americans view her.

A new NBC News/Wall Street Journal poll shows Clinton receiving the lowest "positive" rating in this survey since March of 2001.

Only 37% of those surveyed say they have a positive view of Clinton compared to 48% who give her a negative rating. That's an 8 point drop in her positive rating in just the last two weeks.

Also, for the first time, this poll shows there are more women who have negative views of Clinton than positive, 44% to 42%.

As for Barack Obama, he gets a 49% positive rating and a 32% negative rating. One Democratic pollster calls this poll a "myth-buster", because it shows the Reverend Jeremiah Wright controversy is quote "not the beginning of the end for the Obama campaign."

When asked which candidate can best unite the country, Obama comes out on top with 60% compared to 58% for the Republican John McCain and 46% for Clinton.

Overall, these poll numbers suggest that the negativity of the Democratic battle for the nomination seems to be hurting Clinton more than Obama.

Here’s my question to you: What does it mean if after all the campaigning Hillary Clinton's positive rating is the lowest it has been since 2001?