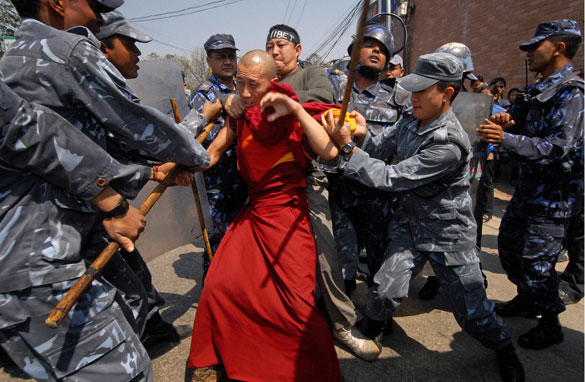 Tonya from Atlanta writes:
China is not Iraq. We can't make up a lie and bomb them. They'd probably bomb us back. So they can pretty much do what they want. We only chastise countries that don't have the same bully power that we do. Bush will go over there and smile. Then Cheney will come out and say "SO!" whenever the casualty numbers are announced across the world.

Will from San Jose, California writes:
There just needs to be video of the crackdowns. Iraqi prisoner mistreatment wasn't a pressing issue until the photos of Abu Ghraib showed up. LA police brutality wasn't front and center until the video of the Rodney King beating. A missing girl isn't a story unless there are lots of photos and video of her smiling face. The sad reality of today's news is that if there aren't images, it didn't happen.

Cookie from South Dakota writes:
Instead of boycotting the games, boycott all Chinese-made products. Don’t buy anything made in China; spend a few dollars more or go without and let the money talk. Then learn to live on USA-made products.

Jake writes:
Sports and politics don't mix. Bush has it right for once. It isn't about the host country, it's about the great tradition that is the Olympics.

Tom from New Jersey writes:
How much are the lives of Tibetans worth? The situations in Iraq, Afghanistan, Darfur and elsewhere have shown that lives in the developing world are worth surprisingly little. So long as the developed world is indebted to China and trying to overcome its trade deficit with the growing Communist power, the sad truth is that short of mass murder, the global community will continue to pay lip service to the Chinese regime.

Thom writes:
Jack, It's clear to me that it has already gone too far. We should not only boycott China for the Olympics but also boycott Chinese imports. We can all do without tainted food and medication for a while.