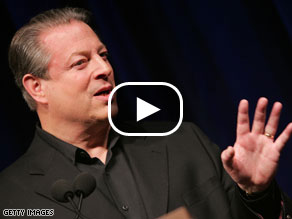 A Florida congressman is suggesting that a brokered convention for the Democrats could lead to some pretty unexpected results. In other words, forget about Hillary Clinton or Barack Obama.

Representative Tim Mahoney says he wouldn't be surprised if someone different is at the top of the ticket. He says a compromise candidate could be someone like Al Gore.

In a newspaper interview, Mahoney said if the convention is deadlocked and either Clinton or Obama suggested a Gore-Obama or Gore-Clinton ticket, the party would accept it.

Mahoney is one of the almost 800 superdelegates who would get to cast a vote at the convention. He hasn't endorsed either Clinton or Obama yet, but has been wooed by both.

It's an interesting idea. It's not clear if Democrats really know what they're in for if this nasty battle continues all the way to the Denver convention. The way things are going, there could be enough acrimony by the time it's over that neither Obama nor Clinton would any longer be viewed as electable.

Al Gore has insisted he won't run and that he has "no plans to be a candidate", although he's also said "I see no reason to rule it out entirely." And, it's worth pointing out that the former vice president and Nobel Prize winner has not yet endorsed either Clinton or Obama. So stay tuned.

Here’s my question to you: If a ticket led by Al Gore somehow emerged from a brokered convention, would that be a good thing for the Democrats?

Adam writes:
Great. So now Obama and Clinton will fight it out to see who gets to be Gore's V.P.? I think that a congressman from Florida has a lot of nerve even suggesting this. The Florida Democratic Party is part of the reason this election is such a mess. The Democratic Party leaders and Florida and Michigan should stand up and start taking responsibility for this mess they've created, instead of patronizing us with ridiculous fairy tales.

Eugene writes:
The fact is if neither candidate has enough votes on the first ballot at the convention then those delegates are released from their pledges and are free to draft another candidate from the floor. This is not robbery, it is simply recognition that neither candidate has a majority of the party's support, and thus cannot be expected to unite the party to win in November. My feeling is that this is the DNC sending up a trial balloon to see if this proposal will garner the support of the party regulars as a solution to the August train wreck that is coming around the corner.

Woody from Tucson, Arizona writes:
That's just stupid. No one runs a campaign for 2 years to give the top spot to someone who wasn't running.

Cindy writes:
A Gore nomination would really tick off the voters of both front-runners and show the world how wishy-washy the Democrats are. It's gotta be Obama or Clinton, and the one who doesn't get the nomination will have to convince their supporters that it's ok to support the other guy. That's why the negative rhetoric has to stop. It's going to make it harder and harder to deprogram their supporters.

Barb from Canada writes:
If you think you've heard griping by not allowing Florida and Michigan votes to count, just try not counting the votes of the entire nation! It would be the end of the Democrats, although Gore would probably win the election!

Angelos from Munich writes:
Yeah, that would make sense: make both candidates unhappy. Next time we can as well do away with the primaries and nominate Chelsea right from the start.