How likely is it Obama will be the Dems’ nominee? 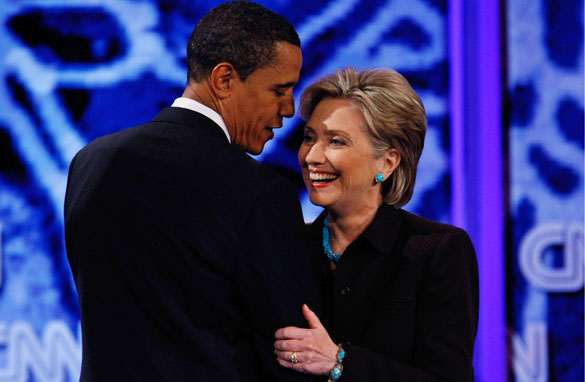 "If there is a road to victory for Hillary Clinton, it is a fairly narrow one."

That's according to a piece in today's New York Times.

It suggests Clinton needs three breaks in order to grab the nomination from Barack Obama. First, she needs a significant victory over Obama in Pennsylvania on April 22nd in order to support her argument that she can deliver big general election states. Then she needs a lead in the popular vote by the end of June. And lastly, Clinton has to convince superdelegates she's the best candidate.

But here's the problem: winning the popular vote seems a nearly impossible task for Clinton if these revotes don't happen in Michigan and Florida. And at this point, it looks very doubtful they will happen in either state.

Also, Clinton's campaign had hoped the uproar over comments made by Obama's pastor would make voters and superdelegates question his candidacy. It might be too early to tell, but it seems like Obama's speech on race was well-received and praised, even by some Clinton supporters.

Meanwhile, President Clinton's former political adviser, Dick Morris, is even less optimistic about Clinton's chances. He writes, "Senator Barack Obama has already won the Democratic nomination. It's over." Morris suggests Clinton can't catch Obama in the pledged delegate count, regardless of what happens during the rest of the primary season. He goes on to say the superdelegates won't override the will of the voters quote "unless Obama is in jail."

Here’s my question to you: How likely is it that Barack Obama will be the Democratic presidential nominee?

Tom writes:
Clinton has no chance. And the sooner she realizes that and throws her support behind Obama, the better it will be for her, the party and the country. Obama needs to concentrate on debating the Republicans, instead of being diverted by Clinton's desperate, dirty, divisive tactics. Clinton is effectively working for McCain and needs to turn over a new leaf and get busy working for Obama.

Mike from New Orleans writes:
I'm not so sure. There could be an Obama gaffe in the near future. He claims to be "shaken up" by the controversy over his church leader. That's cotton candy compared to what's ahead of him from the Swift Boat Republicans. If he's that faint at heart, I'm not so sure he can survive the remainder of Clinton's campaign, let alone the Republicans.

Larry from Fulton, Illinois writes:
Barack's the man, Jack. It's like everyone has been saying since Super Tuesday: the math doesn't come out in Clinton’s favor. She should concede so Obama can focus on the issues he needs to win in November.

Ingrid writes:
The more we learn about Obama, the less he is liked. He got a free ride from the media until a couple weeks ago; that has reversed. If the media had done their job to begin with, he would not be ahead in delegates right now. It is going to be Hillary; Obama has become unelectable.

Brian from Cincinnati writes:
It's nearly certain he'll be the nominee. The elected officials who are superdelegates value their careers, especially the ones in states that Obama won handily, which is quite a lot of them. The problem is: Clinton will stop at nothing to destroy him in an attempt to make him unelectable.

Erin from Battle Creek, Michigan writes:
I'd like to think it is inevitable but after talking to my mother, an avid Clinton supporter, I've recently come to fear that we are in the grip of a "maternal override". Mothers make no apologies when stepping in and doing what they think is in the best interest of the children, even if the so-called children hold the majority view. My mother and many more like her are banking on the superdelegates to rescue the party from the misguided, starry-eyed young people