Has the Reverend Jeremiah Wright episode changed your opinion about Barack Obama? 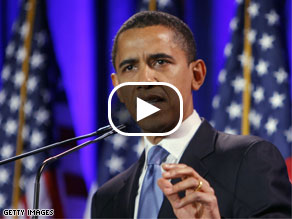 Despite Barack Obama's well-received speech on race this week, there are signs that the comments by his longtime pastor Reverend Jeremiah Wright – that were played over and over again on cable news – may have hurt him.

A CBS News poll shows that among those voters who had heard about Wright's statements, 30% say they have a "less favorable" view of Obama. 2% say "more favorable”, while 65% say their opinion of Obama is unchanged.

When it comes to Republican voters, 47% say they have a more negative view. And as for independents, a key voting block, 36% feel that way.

The survey also shows Obama's unfavorable ratings are up – at 30% now compared to 23% last month.

However, it's important to note that this poll was taken before Obama gave his speech on Tuesday.

And here's another sign that the pastor's comments may have harmed Obama's candidacy: a new Gallup tracking poll out today shows Clinton ahead 48% to 43% in the nomination race. This is the second consecutive day that this tracking poll shows Clinton with a "statistically significant lead" in more than a month.

Here’s my question to you: Has the Reverend Jeremiah Wright episode changed your mind about Barack Obama?

Len from Washington writes:
Yes, I will vote for Sen. Obama. What his preacher says is of little matter to me. We all have friends and family members who have positions or have made statements with which we may strongly disagree. The important issue is that we don't adopt those positions. I believe that to be the case here. I do not find fault with Sen. Obama for statements by Pastor Wright.

Carl from De Pere, Wisconsin writes:
Why was Obama so quick to accept the resignation of one of his foreign policy advisors because of a remark about Hillary being a monster, yet he stuck with Pastor Wright? Could this be the first of many double standards we are about to see?

Natalie writes:
Yes, it has made me even more convinced that he is the right person for the job of president. My father used racial slurs for every person who didn't look exactly like he thought a white, middle class American should look. Should I have left home? Disowned him? The religious right is again proving they are neither religious nor right.

Tracy writes:
I always viewed Obama as a candidate without substance, experience or depth to be commander-in-chief. His rhetoric didn’t inspire me. His long association (not episode) with Wright only confirmed what I suspected to be true: Obama’s words mean nothing.

Jay from Edgewater, Florida writes:
No, not in the least. Senator Obama has explained his views on the race issue, so that anybody would be able to know where he stands. If we all were judged by what our friends and acquaintances did or said, I don't think anyone would be elected to any office… except in New York!