How is the shaky economy affecting you? 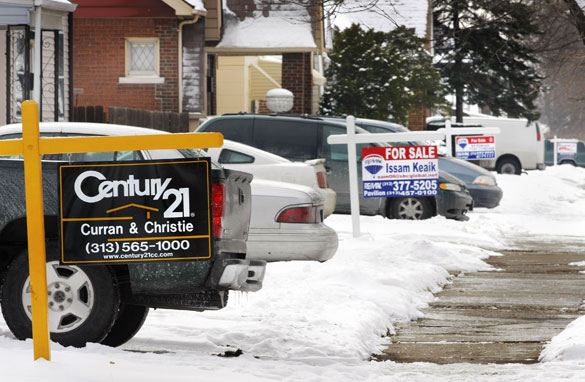 Real estate signs sit in front yard of four houses on one in Detroit, Michigan. The Detroit area, had the highest foreclosure rate in the nation last year. (PHOTO CREDIT: GETTY IMAGES)

The United States' economic problems are getting worse.

Americans are grappling with higher costs for food and gasoline, while their adjustable rate mortgages go up and the value of their homes goes down. The economy is losing jobs – 63,000 of them last month. The dollar continues to hit record lows against foreign currencies, like the Euro, while rising commodity prices signal inflation.

The nation's fifth largest investment bank, Bear Stearns went belly up. And the Federal Reserve, on a Sunday night, struck fear into everyone's heart by suddenly announcing that the government is going to make emergency loans available to Wall Street firms in addition to banks.

Why Sunday night? What did they know that couldn't have waited until Monday during regular business hours, when the fear quotient of their decision could have been greatly reduced?

Similarly, the Fed's race to dramatically lower interest rates in big chunks – for example, today's reduction of three-quarters of a percentage percent – also raises the question whether things are worse than we're being told. A recession is all but inevitable and it could be long and deep.

A new CNN/Opinion Research Corporation poll shows 65% of those surveyed are very concerned about inflation. 59% are very worried about unemployment. 48% point to the drop in home values and 40% to the drop in the stock market.

Here’s my question to you: How is the growing bad news about the economy affecting your daily life?

END_OF_DOCUMENT_TOKEN_TO_BE_REPLACED

Would Clinton do anything to win? 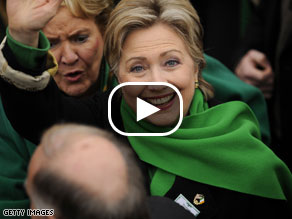 Barack Obama's campaign suggests Hillary Clinton will do just about anything to win, and that includes destroying the Democratic Party.

The Politico reports that Obama's chief strategist David Axelrod calls Clinton "the ultimate Washington inside player" who keeps trying to change the rules:

"When they started off, it was all about delegates. Now that we have more delegates, it's all about the popular vote. And if that does not work out, they will probably challenge us to a game of cribbage to choose the nominee."

Another senior aide thinks Clinton is willing to destroy the party as long as she gets the nomination.

Clinton's campaign called these comments "unhelpful." Communications director Harold Wolfson says he doesn't think either side would destroy the party, that the primary process isn't over yet and we should "let democracy run its course."

At this point, the Clinton campaign is holding out hope that she can top Obama in the popular vote. And if that happens, she'll then try to convince superdelegates to give her the nomination. Both Bill and Hillary Clinton are calling on party leaders to look at more than just pledged delegate counts when they pick their nominee.

Here’s my question to you: Barack Obama’s campaign suggests Hillary Clinton would do anything to win, including destroying the party. Do you agree?
Interested to know which ones made it on air?

END_OF_DOCUMENT_TOKEN_TO_BE_REPLACED

Barack Obama's speech today on race may have been a blessing in disguise.

Perhaps the biggest question surrounding the senator from Illinois was whether he had the stomach for the kind of bare knuckle campaign he is likely to face at the hands of the Republicans if he is the nominee. Pastor Jeremiah Wright gave Obama the chance to "show us the money."

In the face of a withering barrage of taped replays by the media of Wright's comments, Obama had little choice but to suck it up and face the issue head on.

Obama wrote the speech himself. No speechwriters. At one point he said that while he absolutely disagrees with some of the things Reverend Wright said, he can't disown his pastor anymore than he can his white grandmother… a woman he says sacrificed for him and helped raise him, but who also confessed her fear of black men who walked by her on the street and who used racial stereotypes. Obama said, "These people are a part of me. And they are a part of America, this country that I love."

In retrospect, this episode may have given us all a chance to see how Obama responds when the going gets a little rougher than what he's probably used to. The Pastor Wright incident may have been the baptism by fire that Obama needed to seal his credentials to make the run for the White House.

Here’s my question to you: Does Barack Obama’s race matter to you?
Interested to know which ones made it on air?