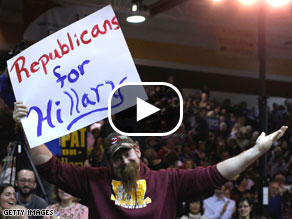 There's no doubt the 2008 campaign has been full of twists and surprises, and here's one more: Republicans are coming out in huge numbers to vote for Hillary Clinton.

The Boston Globe reports on why this is happening: Some Republicans are supporting Clinton hoping it will prolong her bitter fight for the nomination with Barack Obama. Others think Clinton would be an easier opponent for John McCain to beat in November. And still others are voting for Clinton because they want to keep her in the race to expose more information about Obama ahead of the general election.

Consider this: up until recently, Obama was getting a lot more support than Clinton was from Republicans in the primary contests. At the time, many traditional GOP voters said they liked Obama and were willing to cross party lines. But, once McCain sealed the deal with his party's nomination, things started to change. In Texas and Ohio, more than double the number Republicans turned out to vote in those Democratic contests than in earlier ones – and Clinton ran about even with Obama in both states.

Some loud voices within the party – like conservative radio hosts Rush Limbaugh and Laura Ingraham – have been actively calling on Republican voters to do just this. For example, Limbaugh said Republicans should vote for Clinton "if they could stomach it" since it is so important to "sustain the soap opera" between Clinton and Obama.

Here’s my question to you: Is it a smart strategy for Republicans to vote for Hillary Clinton in the primaries?
Interested to know which ones made it on air?

JD from New Hampshire writes:
If you're a Republican, it's a great strategy. Given what took place in the White House during the Clinton years, running against Hillary is a dream come true for them. They'll run a couple of ads to jog the memories of American Idol-infatuated Americans, mention the words "cigar" and "blue dress" a few times and next thing you know they're swearing in John McCain for a third Bush term.

Cindy writes:
I had a Republican neighbor admit to voting for Sen. Clinton. Her 21-year-old son was with her. I think it sets a bad example and to me, it mocks the importance of voting.

Allan from Cameron Park, Calif. writes:
Has Obama been investigated to the degree that Hillary has? The right wing has caused the most intensive and expensive investigation of the Clintons and came up with nothing. They will eat Obama alive. Hillary is the only one who can beat McCain, and his continuing the status quo. If you like war and depression, vote for McCain

Ken from Seattle writes:
The Limbaugh Republicans know exactly what they are doing. Given how much these folks hate the Clintons, don't you think it's odd that they are voting for Hillary and not lambasting her and Bill as usual? They are chomping at the bit to have her as the nominee so they can come out swinging. Can you imagine the stuff they've been sitting on but can't wait to start talking about? Marc Rich's pardon and his ex-wife’s timely contribution to the Clinton Library come to mind.

Kathleen writes:
Most of my family are Republicans living in Texas and each and every one of them voted for Clinton because they think she can be beat. That was 15 votes for Hillary because Rush Limbaugh said to.