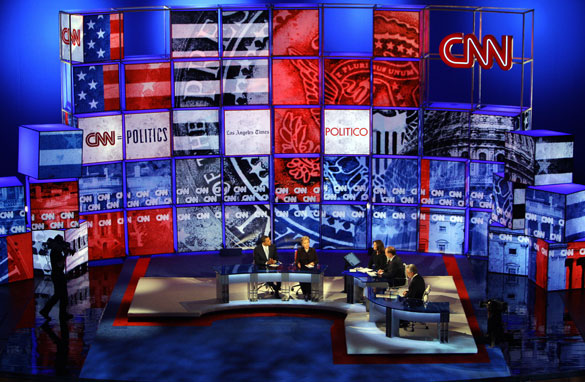 Wendy from San Rafael, California writes:
Debates are used to clarify a candidate's stand on the issues. Now if anyone doesn't know what these candidates stand for, they don't deserve to have the right to vote. I am sick and tired of the debates. All they offer are more sound bites but nothing of substance. If they were held by the League of Women Voters as was formerly done, now then I'd be interested. They were much more substantial.

Rob from Norway, Maine writes:
I think debates are good. It forces these campaigns to stop attacking each other through surrogates and makes them actually say whatever they have to say to the other’s face. It's much more of an adult forum than the "he said, she said, then resigned" that has been going on the past few weeks.

O.A. from Austell, Georgia writes:
Jack, Come on, these debates are really getting out of whack. You become weary of something when it is done too much and I think that the Democratic debates are becoming quite weary to say the very least… The only debate I want to see from now on is between the Democratic nominee and Sen. John McCain. End of story.

Dick writes:
Yes, please. More debates. Here is my idea: We put the nomination on the line and then ask each candidate personal questions like that "Moment of Truth" TV show. The one who tells the truth the most gets the nomination.

Dan from Arizona writes:
I thought the California debate was a fun one to watch. The Texas debate was a little boring. I would still love to see more debates between Clinton and Obama because it helps undecided voters become decided. What else is there to do on Thursday nights? Unless the Phoenix Suns are playing on TV.

Kevin from Warren, Michigan writes:
More debates? Jack, only if you, Bill Maher, and Jon Stewart were the moderators. That would be an evening to remember.