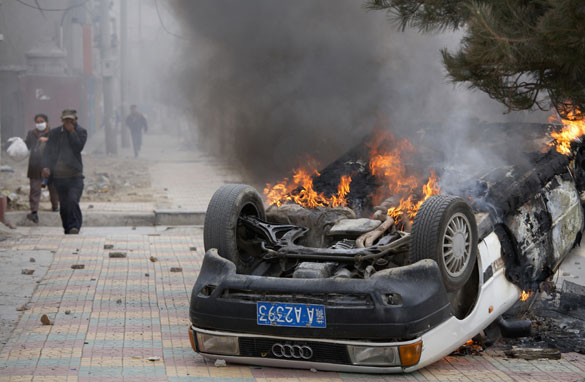 Jeff from Carmel, New York writes:
It's a travesty. We stomp around the world fighting for freedom except when the offender is someone like China, whose money we desperately need. The world should rise up and boycott everything Chinese until the people of Tibet regain their freedom. These are the most peaceful people on earth; they should be role models for all of us. They deserve better.

Terry writes:
I remember in 6th grade participating in a school debate over boycotting the 1980 Olympics in Moscow. I supported that boycott, but today's world is different, as is my opinion. Go to China, enjoy the games, and take your digital cameras. The citizens will be putting on a display for you. Send your pictures to CNN. Don't get caught. Sunshine in China may be the best thing to happen to them. If you want to boycott something to really hurt China, stay out of Wal-Mart.

Brian from Redondo Beach, California writes:
Yes, boycott. China reminds one of Germany in the 30s. Will our people be safe there? And will the judging be fair even if we do attend? Hit them economically, which is what a boycott would accomplish.

James from Canada writes:
Given Guantanamo, rendition, Abu Ghraib, waterboarding, etc., the U.S. is hardly in any position to lead a human rights boycott of the Olympics.

Krake writes:
Boycotting will be a late and inadequate reaction. Allowing China to have the Olympics was the big mistake, especially since it was already known that the Chinese government is a human rights abuser and cruel regime. The violence in Tibet simply highlights what was already known.

Troy writes:
I would rather see our athletes wear "Free Tibet" T-shirts in Beijing during the opening ceremony. Oh Mao goodness.