How can Dems heal the wounds before November? 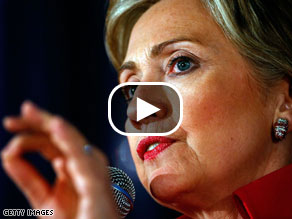 As a wise man once said, "it's getting ugly out there."

The Democratic primary race, which began as a rational discussion of the issues, has degenerated into a nasty and personal battle between Hillary Clinton and Barack Obama.

These kinds of fights leave scar tissue that can be tough to get rid of. And if the Democrats can't figure out how to patch things up in time for November, George Bush can just drop the White House keys in John McCain's mailbox. One Democratic pollster describes how the Democrats might "take what is a golden year and turn it into dust."

So far, no sign of a cease fire. Just yesterday, the Clinton campaign suggested Pennsylvania will show that "Hillary is ready to win and that Obama really can't win the general election." Obama's campaign said these comments were "divorced from reality”, ignoring both polls and the delegate math.

And, much of the week was consumed with that bitter fight over race due to Geraldine Ferraro's comments, which ultimately ended with her stepping down from Clinton's finance committee.

Clinton's camp points out that Obama people have called her "a monster" and "the most secretive politician in America."

One side is going to lose, and they won't be happy. What if Clinton's supporters don't turn out for Obama in November? Or vice-versa?

Here’s my question to you: How can the Democrats heal the wounds of an ugly primary battle before the general election?

END_OF_DOCUMENT_TOKEN_TO_BE_REPLACED

The superdelegates are starting to break for Barack Obama.

Bloomberg news reports that Obama has almost pulled even with Hillary Clinton in endorsements from top election officials, and has cut into her lead among other superdelegates as well.

Since it's unlikely Clinton can catch Obama when it comes to the pledged delegates, the superdelegates will ultimately be called upon to decide the race.

One Obama supporter and superdelegate, Missouri Senator Claire McCaskill says, "That's not glacial, that is a remarkable momentum. I don't think there is anything that will slow that down."

The Clinton campaign doesn't think most of the uncommitted superdelegates will take sides until the rest of the primaries and caucuses are over. Adviser Harold Ickes says, "We think the momentum has been stopped, not cold, but very much stopped."

The Washington Post reports that Hillary Clinton has been opening up her Washington home to woo uncommitted lawmakers. It's not exactly like renting out the Lincoln bedroom… but, hey, whatever works.

Here’s my question to you: How significant is it if superdelegates are moving toward Barack Obama?