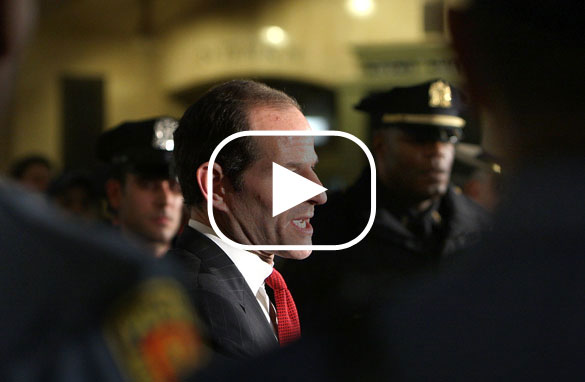 B. writes:
You hit it on the head, Jack. Why these politicians feel they can roam with free reign is beyond me. Why do these elected officials feel they can put themselves in situations where they jeopardize their integrity and embarrass those who support them? It makes me sick as an American and I can only imagine what foreign nations think.

Sean from Los Angeles writes:
Spitzer will probably have to resign. Why? Because he's a Democrat. But Louisiana Senator David Vitter also cavorted with prostitutes and he didn't have to resign. Why is that? Because, as always, It's OK If You're A Republican.

Mat from Boothwyn, Pennsylvania writes:
Of course he won't have to resign. In this short attention span nation of ours, something else will come along and draw our focus away from this, just like it did for the Larry Craig scandal.

Robert writes:
It has been too long since we have held politicians to a higher standard. I feel that ethics and morality are driven by society. What we expect is what we get. If we don't expect quality, how can we expect to receive it? Spitzer should resign.

Gary from Hillsborough, North Carolina writes:
Does this mean Hillary will lose one more superdelegate?

Todd writes:
He should tell the people what sins he's committed and let them decide. Politicians have lived through sex scandals before and many have survived them.

Jim from New York writes:
Spitzer is client 9. His enemies are on cloud 9. Who cares? Why don't we focus on the real problems our country is facing?

Randy writes:
If he is guilty, then he should resign, get counseling, and get a good divorce lawyer.

Joe from Marion, Illinois writes:
Jack, Today we had reports of pharmaceuticals in our drinking water. Spitzer got some of The Ventures "Love potion number nine" in his drinking water!