Who can best restore U.S. position in the world? 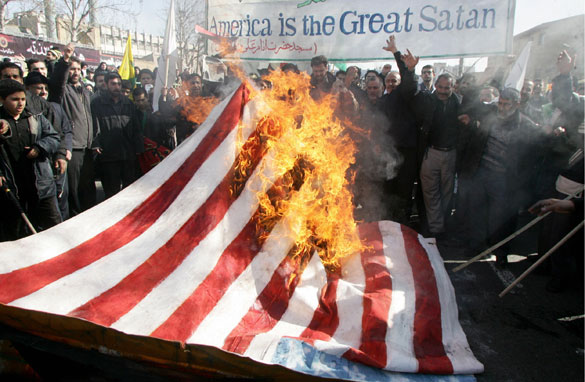 Iranian demonstrators burn a US flag during a rally to mark the 27th anniversary of the Islamic revolution in Tehran, Iran. (PHOTO CREDIT: GETTY IMAGES)

The next president – be it John McCain, Hillary Clinton or Barack Obama – better bring a big shovel, cause it's going to take awhile to muck out the Bush barn. A top concern of many Americans is what's happened to our image abroad.

Americans are very unhappy about where we stand. Since February 2001 – right after President Bush took office – the public's dissatisfaction with our position in the world has more than doubled according to a new Gallup poll.

In February of 2002, the dissatisfaction level was 27%. That's not very long after the 9/11 attacks. That number rose to 50% in the lead-up to the Iraq war. It dipped down to 29% right at the beginning of the war in 2003. But it didn't stay down for long because when the American public found out the invasion of Iraq was based on a batch of lies, the rest of the world found out, too. Today Americans' dissatisfaction level stands at 68%. That's the highest level Gallup has ever recorded on this question, including during the Vietnam war.

There's more bad news. In February of 2001, the number of Americans who thought our country was viewed favorably by the rest of the world stood at 75%. Today that number has fallen to fewer than half of us, just 43%.

So when it comes down to it, one of these three candidates is going to have a lot of fence mending to do.

Here’s my question to you: Which candidate would do the best job restoring America’s position in the world?

END_OF_DOCUMENT_TOKEN_TO_BE_REPLACED

If you're John McCain, the good news is that you have been endorsed by the President of the United States, George Bush. That may also be the bad news.

Once bitter enemies, the two men staged a virtual love-in at the White House yesterday while Bush sang McCain's praises and promised to do anything he could to help him – whether that means showing up or staying out of the picture. Mr. Bush insists that the election will be a referendum on McCain, not on him.

Really? Not everyone may feel that way. Bush is an unpopular president who is tied, much like McCain, to an unpopular war and is presiding over an economy that, according to billionaire investor Warren Buffet, has already slipped into recession.

So just how closely does McCain want to be identified with President Bush? Some Democrats are already calling McCain "McSame" and referring to him as "George Bush-Light." McCain's campaign suggests they'll use President Bush for fund-raising and at events in heavily Republican parts of the country, but it doesn't sound like there will be many joint appearances.

The campaign insists this has nothing to do with the president's low approval ratings, but rather because the candidate needs to "stand in the sun" on his own. More straight talk from the McCain camp.

The Democrats are positively giddy about being able to tie McCain to the president. The DNC has posted a video clip of Mr. Bush's endorsement on its web site, saying that McCain has "worked hard over the last 8 years to throw away his maverick image and morph into the ultimate Bush Republican." Ergo the nickname, "McSame."

When McCain was asked if the endorsement might hurt him among independent voters, he answered that he's on the same page as the president when it comes to the party's principles along with their shared conservative philosophy. Which was not an answer to the question. Even more straight talk.

Here’s my question to you: What will President Bush’s endorsement mean for John McCain?

END_OF_DOCUMENT_TOKEN_TO_BE_REPLACED

Should Obama go negative to win? 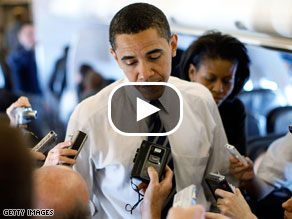 Barack Obama's campaign up to this point has been refreshing. He seems almost too nice to be running for political office. His message has been about hope and change and a future filled with the hard work of restoring the greatest nation on earth to its rightful place as a beacon of hope for the rest of the world.

And it's a strategy that has propelled him to the front of the race for the Democratic nomination. But his failure to seal the deal this week in Ohio and Texas may bring change.

Hillary Clinton landed some body blows in the hours leading up to Tuesday's voting. An ad about a 3am phone call that preys on women's fears for the safety of their children. Questions about indicted real-estate developer Tony Rezko and Obama's position on NAFTA didn't help either.

Now Obama is starting to reciprocate, questioning what kind of foreign policy experience Hillary Clinton actually has and pointing out that she wasn't negotiating treaties or handling crises.

Obama has dubbed Clinton the "most secretive politician in America today." He's criticizing her for not releasing her income tax returns after saying she would do so "earlier," and calling on her to release records about her years as First Lady. She hasn't done that either, and Obama says that voters deserve to know why Clinton is hiding information.

The Clinton campaign doesn't seem too happy that Obama is starting to fight back. Clinton spokesman Howard Wolfson was whining that Obama is acting like Kenneth Starr, the special prosecutor who investigated the Clintons.

Here’s my question to you: Does Barack Obama have to go negative to win the Democratic nomination?