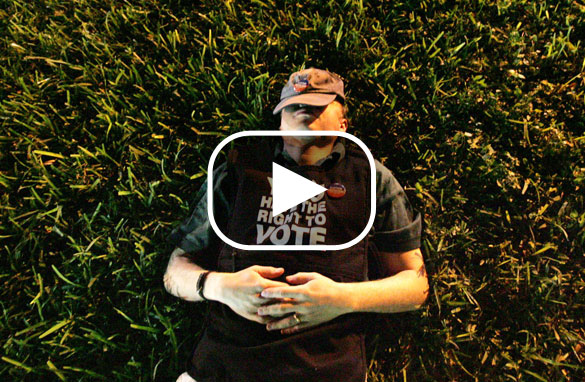 (PHOTO CREDIT: GETTY IMAGES) Click the play button to see what Jack and our viewers had to say.

The presidential primary campaign has been going strong for 14 months now – it just seems longer – and there don't seem to be many signs, especially on the Democratic side, that it will be over any time soon.

At the beginning of 2007, people were lining up to run for president. At the height of the silliness, we had a total of 18 candidates between the Democrats and Republicans. There are still four major candidates in the running… although the argument could be made that after tomorrow there should only be two.

The voters have been through dozens of primaries and caucuses, as well as dozens of debates. There are the countless mind-numbing TV reports and armies of correspondents and pundits tripping over each other all around the country in the race to come up with something profound. Mostly they don't.

Millions of us have been bombarded with TV commercials, fliers, mailings, pleas for donations, e-mails and phone calls from the candidates and their supporters.

Russia got a new president in about 8 minutes: Vladimir Putin picked his guy, said let's vote, they voted, and he's in. We're not suggesting that's the way it ought to be done here because God only knows what President Bush would come up with…

Here’s my question to you: How can you tell if you’re suffering from primary election fatigue?
Interested to know which ones made it on air?

END_OF_DOCUMENT_TOKEN_TO_BE_REPLACED

[cnn-photo-caption image= http://i.cdn.turner.com/cnn/2008/images/03/03/art.texas.huckabee.gi.jpg caption=" Mike Huckabee speaks to supporters at the Fort Worth Stockyards February 29, 2008 in Fort Worth, Texas."]

There is a poll out that raises serious questions about whether Republicans really like Mike Huckabee or whether they really don't like John McCain.

It's a USA Today/Gallup poll that says 49% of Republicans surveyed think Mike Huckabee should stay in the race for the Republican presidential nomination. This can't be very comforting for John McCain who is the presumed nominee, almost half of Republicans don't want Huckabee to go. Only 46% say Huckabee should drop out. If McCain's popularity was what it should be, that number would be much higher. An even larger margin of Conservative Republicans, 54% to 42%, want Huckabee to stay in this thing.

This has to be tough on John McCain's ego, not to mention his possible chances to win the White House. Ahead of the Texas primary tomorrow, The Dallas Morning News has endorsed Mike Huckabee even though the newspaper admits he has no chance of winning. The Dallas paper says a vote for Huckabee would be "a good investment in the Republican Party's future", adding he's been "on the right side of campaign finance reform and environmental issues."

As for McCain, the editorial board says his age and "choleric temperament gave us pause particularly when contrasted to Mr. Huckabee's sunny-side-up brand of conservatism."

Here’s my question to you: What message does it send to John McCain when nearly half of Republicans want Mike Huckabee to stay in the race?

END_OF_DOCUMENT_TOKEN_TO_BE_REPLACED

Should Clinton drop out if she loses Texas & Ohio?

There's a growing number of voices saying Hillary Clinton should get out of the race unless she can deliver big victories tomorrow in Texas and Ohio.

Governor Bill Richardson, who hasn't endorsed anyone yet, says quote, "I just think that D-Day is Tuesday", adding that whoever has the most delegates after tomorrow should be the nominee.

Some top Democrats who have backed Barack Obama are making the same argument. Senator John Kerry says Clinton needs more than narrow victories to stay in this thing.

And Senator Dick Durbin says the delegate math makes it tough for Clinton to win the nomination. He says, "I just hope ultimately she makes an honest appraisal of her chances… I hope that her decision on her future after Tuesday is made in the interest of unity of our party."

But, Senator Dianne Feinstein says Clinton should ignore the pressure to quit the race, that she has every right to stay in it if that's what she chooses.

And if you listen to Clinton, it doesn't sound like she's going anywhere. She believes she'll do "very well" tomorrow and will then move on to Pennsylvania and other upcoming contests, adding "I'm just getting warmed up."

It looks like her campaign is also trying to raise expectations for Obama, saying that if Obama loses any of the four contests tomorrow, that would mean Democrats are having second thoughts about him.

Here’s my question to you: If Hillary Clinton doesn't win both Texas and Ohio tomorrow, should she quit the race?