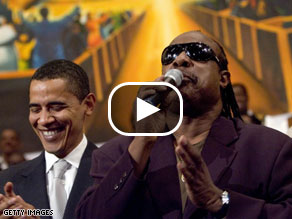 Music plays an important role on the campaign trail. The right song can rally the crowd and get them pumped up before the candidate gets onstage.

But, several of the presidential candidates have had problems when it comes to picking their music. Hillary Clinton held an online contest to choose her song and came up with the "You and I" by Celine Dion. Fine, except Dion is Canadian. That song had to be scrapped.

John McCain at one point was using John Mellencamp's hits like "Our Country" and "Pink Houses". But the liberal rocker apparently wasn't comfortable with the conservative McCain using his tunes and told him to stop. McCain also ran into problems using the theme song from "Rocky," and also opted against using "Take a Chance on Me" by the Swedish group Abba because of licensing and other concerns.

Mike Huckabee tried playing "More than a Feeling" by the group Boston. They balked, saying Huckabee didn't have permission and was, "the polar opposite of most everything Boston stands for."

As for Barack Obama, he reportedly flicks through his i-Pod at campaign events and picks his favorite Stevie Wonder or Aretha Franklin tune. But on the night of the New Hampshire primary, they played Wonder's "Signed, Sealed, Delivered." Whoops. He lost that night to Clinton.

Here’s my question to you: What theme song would you suggest for any of the remaining presidential candidates?

END_OF_DOCUMENT_TOKEN_TO_BE_REPLACED

How can McCain compete with Dems’ fundrai$ing? 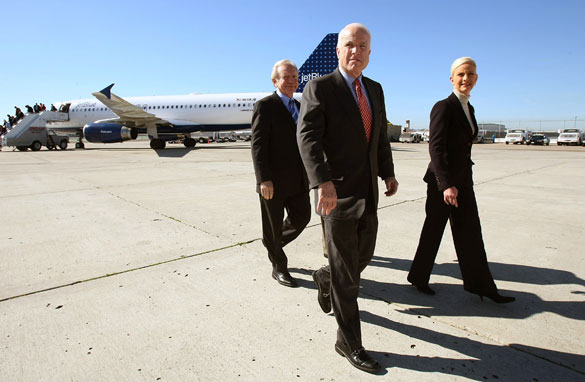 Turns out February was a big money month for the Democratic presidential contenders.

Hillary Clinton raised $35 million this month, more than double her January total of $14 million, despite 11 straight losses and her drop in the national polls. Clinton attributes the jump in donations to her passionate supporters who wanted to help when they saw the campaign struggling. One aide says the breakthrough moment actually came when Clinton announced she had loaned her campaign $5 million of her own money.

When it comes to Barack Obama, some estimate that he's raised more than $50 million in February. The campaign won't confirm that number, but insists it's had a strong month and raised "considerably more than Clinton's total." Obama raised $36 million in January,and it's estimated that on many days in February, his campaign took in more than $2 million.

There is no denying that the Democratic base is energized and raising buckets of money. A lot of these millions are coming from hundreds of thousands of small donors who can keep on giving. This could all prove to be a king-sized headache for the Republicans. John McCain raised about $12 million this month, which is about the same as what he raised in January.

Do the math. If the Democrats can raise $85 million a month and the Republicans raise less than a fourth of that, it's going to be a short campaign.

Here’s my question to you: The Democrats raised an estimated $85 million in February. How can John McCain compete when he only raised $12 million?

END_OF_DOCUMENT_TOKEN_TO_BE_REPLACED

Dems down to the wire in Texas, Ohio?

It's down to the wire in Texas and Ohio, where Hillary Clinton and Barack Obama could potentially face each other for the last time.

Both candidates are spending lots of time and money in the two delegate-rich states which will vote on Tuesday, along with Vermont and Rhode Island.

At this point, the momentum seems to be all in Obama's favor. He has won the last 11 contests in a row and continues to improve his standing in the polls in these two key states as well as nationally.

In Ohio, our poll of polls shows Obama has narrowed what was once a much larger gap. He now trails Clinton by 7 points, at 47% to 40%. One poll even shows him only behind by 2 in Ohio – a statistical tie.

The stakes are huge. Hillary Clinton must win big next Tuesday, not only to keep her campaign alive and move on to Pennsylvania, but also to stop another troubling sign for her. She's beginning to lose her advantage among the superdelegates. In the last few days, at least 9 superdelegates have declared their support for Barack Obama. One survey even shows that Clinton's lead among superdelegates was more than halved in the month of February.

Here’s my question to you: With four days to go before the Texas and Ohio primaries, what will decide the outcome of the Democratic race in these two states?