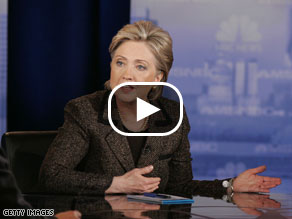 Early on in last night's debate, Clinton referenced a "Saturday Night Live" skit that showed reporters fawning over Obama and showering him with softball questions. She said, "Maybe we should ask Barack if he's comfortable and needs another pillow." Clinton also whined about getting asked the first question more often in the last several debates.

The Clinton campaign has been complaining recently – more so since she has fallen behind – that the news media is tougher on her than Obama. It's a tactic as old as politics: things aren't going well, blame the media.

In today's column in The New York Times, Maureen Dowd questions Clinton's line of attack against the media.

She writes: "Beating on the press is the lamest thing you can do. It is only because of the utter open-mindedness of the press that Hillary can lose 11 contests in a row and still be treated as a contender."

She has a point. If Barack Obama had lost the last 11 races in a row since Super Tuesday, we wouldn't even remember his name.

Here’s my question to you: Have the news media been unfair to Hillary Clinton?

Bob writes:
Hillary needs to quit complaining and get with the program. Just face life. She isn't a likable person and does not come off well against someone who has control of his emotions. No matter how hard the press tries to make her look good, she will find a way to mess it up. She is a fighter and it shows. Obama is a negotiator and it shows. People are tired of fighting.

Amy from Kalamazoo, Michigan writes:
Jack, You'd have to be blind and deaf not to notice some of the media bias against her. Is it something she should bring up in the manner she did last night? No. Is it a totally unfounded complaint? Not at all. If you think the media have been across-the-board fair to all candidates, then you're the one living the fairy tale.

M. from Los Angeles writes:
Hillary Clinton is looking for someone to blame, anybody to blame for her problems. Anybody but herself. She has blamed and fired staff, she has blamed Obama, she has blamed voters for not being "realistic in their support," and now she blames the press. At some point, she is going to have to take responsibility for her own campaign.

Mark from Asheville, North Carolina writes:
Aw, gee, Jack. Just because everything she and President Clinton say and do are attacked by the media, and Obama gets continual positive coverage and commentary, you are asking if the media is unfair to her? I'm shocked, I tell you – shocked! In all my 40+ years watching politics, I have never seen anything like the obsessive, relentless pro-Obama bias that is rampant right now.

Gerry writes:
When CNN used to be called Clinton News Network, Hillary had no complaints. It's not that the media are giving Obama a free ride. It's just that the media are accurately reflecting a strong desire among the electorate to see an end to the Clinton/Bush era. And as the pressure has mounted on Hillary, she has become increasingly less gracious.

Dale from Alexandria, Virginia writes:
Obama has won 11 contests in a row, has received multiple high-profile endorsements, and has passed Hillary in the polls – all in a matter of weeks. It appears that the facts are biased against Clinton, not the media.