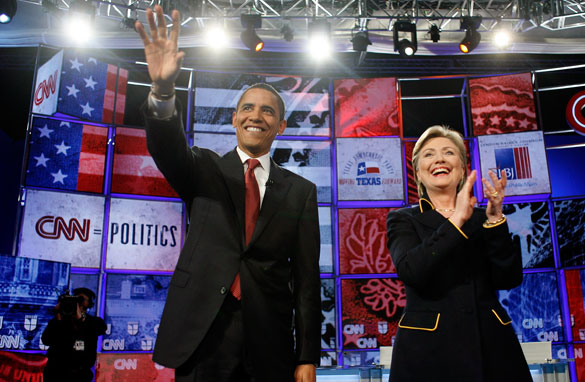 Sen. Barack Obama and Sen. Hillary Clinton debate in the Lyndon B. Johnson Auditorium at the University of Texas on February 21, 2008 in Austin, Texas. (PHOTO CREDIT: GETTY IMAGES)

Hillary Clinton has her work cut out for her when it comes to tonight's debate in Cleveland, Ohio. If she has any hope of closing the gap on front-runner Barack Obama next Tuesday in Texas and Ohio, Clinton has got to deliver a big night tonight…a really big night.

The question is, "Which Hillary Clinton will show up?" In the last few days, we've just about seen it all.

At Thursday's debate in Austin, Texas, Clinton showed a softer side – saying she was "honored" to be there with Barack Obama. A couple of days later she morphed into a scolding mother talking down to a child, waving her finger and saying "Shame on you, Barack Obama."

She called him out demanding he "meet her in Ohio for a debate on his tactics and behavior in the campaign." She wasn't finished. Resembling someone with multiple personality disorder, last Sunday Clinton mocked Obama and derided his calls for unity. She made fun of him as though his eleven straight victories in the primaries meant nothing.

Meanwhile, some new national polls show Obama – who trailed Clinton for months – now surging ahead. In one poll Obama has a 16 point nationwide lead over Clinton, suggesting that he continues to build a broader coalition among Democratic voters from all walks of life.

Here’s my question to you: What does Hillary Clinton have to do at tonight's debate to slow Barack Obama's momentum?

END_OF_DOCUMENT_TOKEN_TO_BE_REPLACED 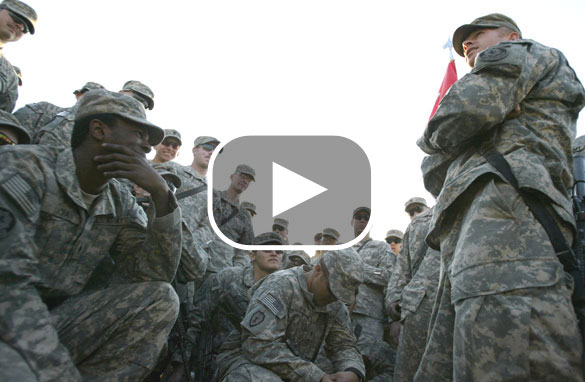 3rd battalion 2nd Stryker cavalry regiment on the outskirts of the restive city of Baquba, northeast of Baghdad, January 2008.  Click the play button to see what Jack and our viewers had to say.
(PHOTO CREDIT: GETTY IMAGES)

John McCain is tying his future to what happens in Iraq. He says he will lose the race for the White House if he can't convince Americans that our policy in Iraq is succeeding. He may be onto something.

Not long after the words came out of his mouth, McCain tried to put them back in, which hardly ever works. McCain said he wanted to retract the "I'll lose" comment, but added that how the American people judge Iraq will have a direct relation on how they judge him.

It's not an unreasonable proposition that McCain sees his future so closely entwined with the war in Iraq. Last summer, when a lot of U.S. troops were dying there and McCain was supporting the surge, his campaign was losing staff, short on money and close to collapse.

McCain claims both Hillary Clinton and Barack Obama were both wrong about the "surge" and points to recent political progress in Iraq. What he doesn't mention is that Obama was opposed to the invasion of Iraq from the outset, while Clinton voted for it. Both Democratic candidates insist that if elected, McCain would only continue President Bush's "failed" policies. And they highlight his remark that U.S. troops could be in Iraq for 100 years at every opportunity.

McCain has his work cut out for him. Despite the decrease in violence in Iraq and some political progress, five years after the invasion, about 60% of Americans still think the war was a mistake.

Here’s my question to you: John McCain says he could lose the election over the Iraq war issue. Is he right?

END_OF_DOCUMENT_TOKEN_TO_BE_REPLACED

It looks like some of Hillary Clinton's advisers may be avoiding the political writing on the wall.

In a terrific piece in today's Washington Post called "Team Clinton: Down, and Out of Touch", Dana Milbank writes about a breakfast held Monday with two Clinton advisers and members of the media, hich he describes as a "fascinating tour of an alternate universe."

First, one of Clinton's top advisers, Harold Ickes, talked about her campaign in a way that seemed far removed from the real-world. He said they're "on the way to locking this nomination down", that they're "on the verge of their next up cycle" and that the race is quote "tight as a tick." This is called denial.

Next came anger in the person of Clinton spokesman Phil Singer, who ripped into the media when he was asked about that photo of Barack Obama wearing Somali tribal dress. The photo first showed up on the Drudge Report, which claimed they got it from someone inside the Clinton campaign. All day yesterday there was no response to that claim from Clinton's campaign. Finally at five o'clock yesterday afternoon after the damage had been done, the Clinton campaign said they had nothing to do with releasing the picture. Singer derided the media by pointing to a sketch on Saturday Night Live.

Milbank sums it up with this, "That Clinton's spokesman is taking his cues from late-night comedy is as good an indication as any of where things stand in the onetime front-runner's campaign. To keep the press from declaring the race over before the voters of Ohio and Texas have their say next week, Clinton aides have resorted to a mixture of surreal happy talk and angry accusation."

Here’s my question to you: Is the Clinton campaign being realistic about Hillary's chances?