How will Ralph Nader affect the race? 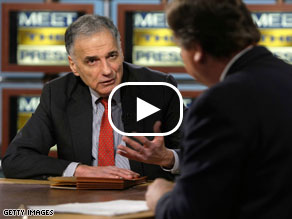 Ralph Nader on Meet the Press. Click the play button to see what Jack and our viewers had to say.

Some people just won't take "no" for an answer.

Consumer activist Ralph Nader is planning his 4th consecutive bid for the White House – fifth if you count his 1992 write-in campaign.

Nader says he's running as a third-party candidate because he wants the chance to improve our country by fighting back against big money and special interest groups.

He thinks most people are disenchanted with both the Democratic and Republican parties because of the Iraq war and the state of our economy. And he's right, but they are also disenchanted with Ralph Nader – as evidenced by his 0-5 record in presidential runs.

In addition, many Democrats still blame Nader for Al Gore's loss in 2000. Being tone deaf, Nader rejects the idea that he's a "spoiler" candidate. He says voters won't choose a "pro-war John McCain." Note to Ralph: voters won't choose you either. Last time out Nader corralled a whopping 0.3% of the vote.

Democrats Hillary Clinton and Barack Obama were quick to make it seem like Nader's announcement wasn't such a big deal. Clinton says that it's not helpful to whoever the Democratic nominee is, but it's a free country. Obama called Nader a "singular figure in American politics", but also dismissed him, saying 8 years ago Nader thought there was no difference between Al Gore and George Bush.

Here’s my question to you: Ralph Nader says he’s running for president again as a third-party candidate. What effect will he have on the race?

Bob from Pittsburgh writes:
Jack, I hope that as I age, I don't make the same mistake Ralph Nader is making. It's always better to go out at the top of your game (a long time ago for Nader), than to struggle out onto the playing field and make everyone cringe. Ralph once did consumers a great service – he is now doing his country a grave disservice.

Jeff from North Carolina writes:
Why is he coming in at this particular time? Why not earlier? Who is he really working for?

Larry from Georgetown, Texas writes:
Jack, If Nader believes that the American people are disenchanted over Iraq, maybe he should try this on for size and sleep well at night. He is responsible for all of the American soldiers and all of the innocent people killed in Iraq. In the words of Ron Paul, "Just think about it." If he had not run in 2000, we would not be in Iraq today, maybe Osama would have been captured and our economy would not be in the pit that it is today.

Chris writes:
Nader... this guy is like that fly that keeps landing on your potato salad at the picnic. He just doesn't take a hint – even when he's nearly squashed. As an Independent, I was hoping for an entry, it just wasn't Nader. Bloomberg would be nice, Dobbs another fine choice. Heck, I'd even like to see Gore run as an Independent. Just not that pain in the *** Nader.

D. writes:
Jack, I hope Mr. Nader shakes up this race until they foam! These candidates were not chosen by many of us and we don’t believe in their positions on many issues. We need a third party candidate and right now Ralph Nader is all we have! Go Ralph!

Shaun writes:
Jack, His effect? He'll waste his supporters’ hard-earned money on a campaign that is simply designed to boost his gigantic ego. He'll get nowhere… again